South America is a relatively unknown quantity among many market participants, its own rapidly developing FX industry having remained in the shadow of its mainstream counterparts such as Europe, North America and the Far East – until now.

Today, the Bank for International Settlements (BIS),  released a report in which the results of its examination of the asymmetric effects of FOREX intervention using intraday data are documented, using evidence from the Peruvian market.

Peru, according to the report, has a very domestic-oriented inter-bank FX market, being primarily a local market based on spot transactions. Although, there is a forwards and options market, it is very small compared to the nation’s spot FX market.

Spot forex market transactions take place primarily on a private electronic trading platform, operated by the company DATATEC. The platform is based on a blind system in which the bidders are known only to those involved in the transaction, and become generally known only after the transaction is closed.

It operates between 9 am and 1:30 pm, Monday through Friday. The transactions are settled same day, under a real time gross settlement (RTGS) system, on a payment versus payment platform through each bank’s account at the central bank.

The participants in the FX market are commercial banks. However, about five banks are the major players in terms of average amount traded. Currently, the average amount traded in the interbank spot forex market is around $700 million a day. The record amount for one day is approximately $1,700 million, representing almost 1 percent of GDP.

The initial point of interest is that this represents the first time, undisclosed and comprehensive intraday intervention data – minute by minute data points for all trading days between January 2009 and April 2011 – have been used for Peru.
Secondly, the paper shows that Central Bank interventions in the foreign exchange market have asymmetric effects on the spot exchange rate.

In particular, sale interventions have a greater effect on exchange rate than purchase interventions. This result is robust to event study regressions, and to a SVAR identification proposed in the research paper.

In contrast, exchange rate appreciations are not linked to short-run financial crises, but to capital flow bonanzas. Thus, fear of appreciation is more related to fear of misallocation of resources between tradeable and non-tradeable sectors, and fear of excessive credit booms.

An asymmetric reaction function, in turn, implies that for a given pressure of appreciation or depreciation, the central bank intervenes differently, depending on whether it is purchasing or selling. This means that the features of purchase and sale interventions differ in terms of the volume of each transaction, daily aggregate volumes, dispersion of intervention transactions across market participants and intraday timing of intervention.

The data used to compile this particular report was extrapolated from trading activity between 2009 and 2011 in Peru’s FX markets. The paper shows that central bank interventions in the FX market have asymmetric effects on the spot exchange rate. In particular, sale interventions are more effective than purchase interventions. In addition, the conclusion reached by the BIS confirms a previous finding for Peru, which was documented in Flores in 2003.

Latin America in general, is fast becoming a region of interest among the institutional FX sector. For a full and detailed report on the entire dynamics of the FX landscape in Latin America, Forex Magnates research can be purchased here. 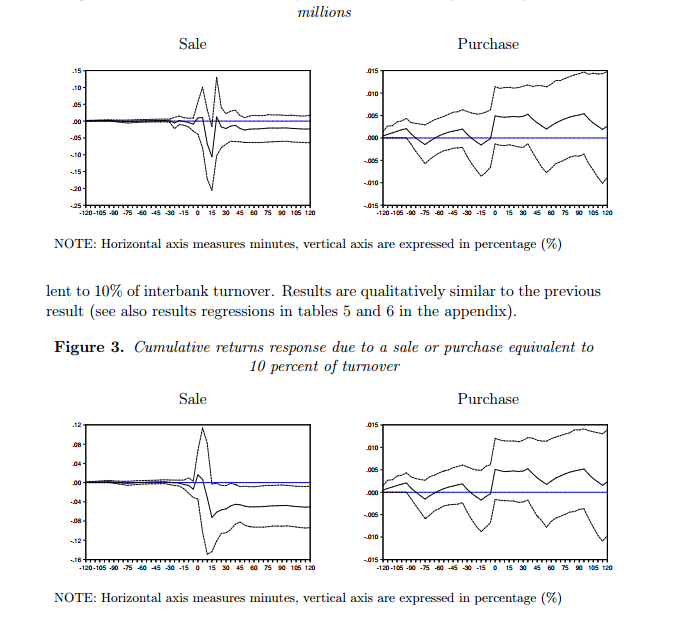