The owner of multiple exchanges and business lines including the NYSE, under the group operator Intercontinental Exchange Inc. (ICE), today reported its 2015 annual report which saw modest rises across key business metrics, including a rise of nearly 8% for net revenue which reached nearly $3.34 billion, up from $3.09 billion year-over-year.

The company’s CEO and Chairman Jeffrey C. Sprecher commented in the letter attached to the annual report: “In 2015, we again delivered on our double-digit earnings growth target. This marked our 10th consecutive year of both record revenue and adjusted earnings growth, which is an unmatched achievement in our sector.”

An excerpt of the company’s consolidated financials can be seen in the snapshot below. 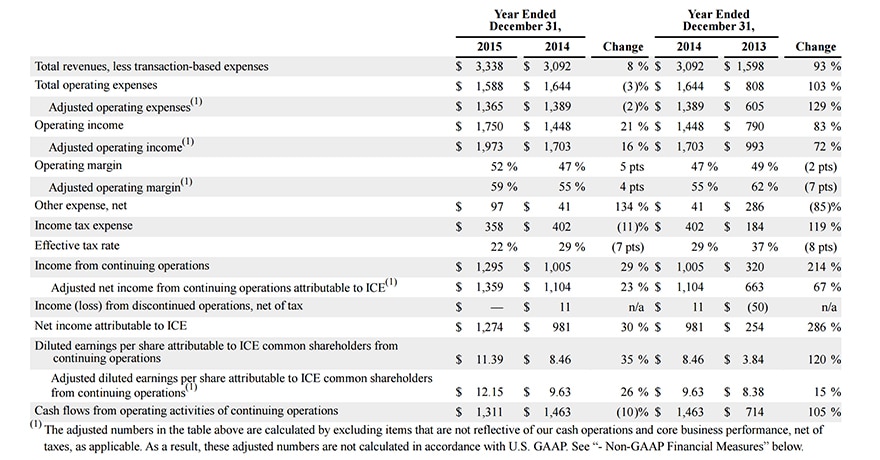 Two key acquisitions towards the end of last year included the Trayport for a total purchase of $620 million, and the acquisition of the Interactive Data corporation for $5.6 billion. A drop in operating expenses, as well as lower income tax expenses year-over-year, helped the adjusted operating income rise 16% to $1.973 billion for 2015.

The reported noted how the significant volatility in oil prices coupled with its suite of related oil products offered by the company helped result in the record oil revenues that grew 14% in 2015 when compared to the previous year.