The boundaries of retail Forex are becoming more blurred, among other distinctions made according to the latest quarterly review released by the Bank for International Settlements (BIS) yesterday.

The report highlighted key observations in Foreign Exchange, including retail and institutional segments, and noted lower volumes in October 2013, in comparison to prior reports, as the share of the inter-dealer market fades into multi-bank trading venues.

According to the article, the inter-dealer share of the FX Market is now down to only 39%, much lower than the 63% in the late 1990’s, and the once clear-cut, two-tier structure of the market with separate inter-dealer and customer segments no longer exists.

There is no distinct inter-dealer market anymore, but a coexistence of various trading venues where also non-banks actively engage in market-making, as noted in the BIS survey.

At the same time, the number of ways the different market participants can interconnect has increased significantly, suggesting that search costs and trading costs are now considerably reduced, as can be seen in the broad market (with lower spreads offered by providers).

According to the BIS article, this has paved the way for financial customers to become liquidity providers alongside dealers. This has caused financial customers to contribute to increased volumes not only through their investment decisions, but also by taking part in what was referred to as a new “hot potato trading process”, where dealers no longer perform an exclusive role.

Inter-dealer trading has continued to lose market clear-cut divide between inter-dealer, and customer-trading segments have faded. Noted was that top-tier dealers retain a crucial role as prime brokers as a driver of the concentration of trading, as such arrangements are typically offered via major investment banks in London or New York, noted in the quarterly survey.

A comparison of less frequent reports on volumes, such as the Triennial survey with that of more frequent reports from the Foreign Exchange Committee (FXC), and CLS, shows the monthly frequency of volumes as can be seen in the excerpt below (graph 3): 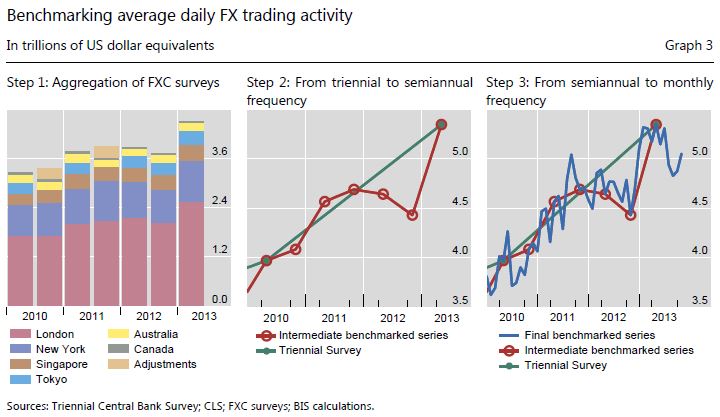 Saved by the Liquidity Aggregators

After the dispersion of liquidity from the inter-dealer market, a more fragmented structure has emerged risking the localisation of available liquidity, which could potentially harm trading efficiency by increasing search costs and broadening the number of available venues to choose from, as noted in the article.

However, BIS authors posited that a significant innovation to prevent this increase in trading costs and market inefficiency has been the proliferation of liquidity aggregation. This new form of aggregation effectively links various liquidity pools via algorithms that direct the order to a preferred venue (e.g. to the venue with the best price).

This was noted as allowing market participants to pick preferred counterparties and choose from which liquidity providers, both dealers and non-dealers, to receive price quotes, all of which are features that have become common-place in recent years. According to the BIS authors, this suggests that search costs, a salient feature of OTC markets [Duffie (2012)], have significantly decreased.

An article in the report showed that Non-dealer financial institutions, including smaller banks, institutional investors and hedge funds, have become the market’s largest counterparty  segment.

The BIS authors noted that by design the Triennial survey only captures retail trades that ultimately end up with dealers directly or indirectly through retail aggregators. This is mainly due to the nature of how the data is collected to avoid double-counting.

Regulatory changes (such as leverage limits for margin brokerage accounts for private investors) in countries such as the United States was also noted as having slowed growth in the retail segment and led some platforms to target themselves towards professional investors (such small hedge funds), according to the report.

In October, volumes were reported as lower as when comparing with the all-time highs of $5.3 trillion uncovered in April’s Triennial Survey.  BIS authors suggested that activity actually peaked in April 2013, when the Triennial Survey was taken.

Subsequently, volume records from April fell back to around $5 trillion per day in October, and one of the possible reasons noted for this was attributed to the Fed’s hint that it might “taper” its asset purchases, which was followed by a sharp fall in cross-border credit to some large emerging market economies (since then).

The December report indicated how widespread use of algorithmic techniques and order execution strategies allow the sharing of risk to occur faster and among more market participants throughout the network of connected venues and counterparties. The opening of EBS and Reuters to non-dealers via prime brokerage agreements was a key catalyst, but today all platforms offer ways to connect computer-generated trading.

Over the period 2007–13, algorithmic trading at EBS grew from 28% to 68% in volumes (Graph 5, right-hand panel) and non-dealer financial institutions are increasingly engaged in providing liquidity, as the ease of customizing the types of counterparty connections reduces exposure to ad verse selection risk.

The report noted that as a consequence, a given imbalance can be matched against the quotes of more liquidity providers, both dealers and non-dealers, and shuffled faster through the network of trading venues (via algorithms).

This has increased the velocity of trading, and effectively is a new form of ‘hot potato trading’, but no longer with only dealers at the center, as per the report.

Algorithmic trading is essential to the efficiency of this process, and has become pervasive among dealers and end users alike, further validating the role of algo’s in increasing market efficiency.

The distinction between algorithmic trading and high-frequency trading (HFT), is that the latter is a subset characterized by extremely short holding periods at the millisecond level, and a vast amount of trades are often cancelled shortly after submission.

According to the report, EBS estimates that around 30–35% of volume on its trading platform is HFT-driven, and Forex Magnates has previously written about steps that EBS’s management has taken to curb certain time-only driven strategies.

HFT strategies can both exploit tiny, short-lived price discrepancies and provide liquidity at very high-frequency, benefiting from the bid-ask spread, as described in the BIS survey.

Speed is crucial, and as competition among HFT firms has increased, additional gains from being fast have diminished. According to the BIS quarterly survey, HFT was noted as not having been a significant driver of turnover growth since 2010.

The growing participation of non-dealer financial institutions was noted as having been facilitated by the availability of alternative electronic platforms. The FX market of the 1990’s was a two-tier market, with the inter-dealer market as clearly separate turf. This has changed, as noted above.

In today’s market structure, electronic trading dominates and is the preferred trading channel, with a share above 50% for all customer segments, and is available for all instruments and investors across the globe, noted by BIS authors. This market-wide presence, together with its slowing expansion, suggests that electronic trading has matured. Spot is the segment with by far the highest fraction of trades conducted electronically, at 64%.

The report compared that despite the prevalence of electronic trading, voice (via phone) and relationship trading remain sizable in some segments. Voice contact may provide advice on alternative order execution strategies or ways to implement a trade idea, via personal feedback from dealers to customers. It may also help to avoid high-frequency traders as a counterparty, or to ensure execution in a busy market.

Voice remains the preferred execution method for more complex FX derivatives such as options, where 62% of the deals were done by phone, as noted in the report. The shift away from a clearly delineated inter-dealer market is reflected in the execution methods data in the Triennial survey, compiled from April’s volumes earlier this year.

The report noted how on EBS and Reuters Matching, which used to be dealer-only electronic platforms, the absolute volume of dealers’ trading with other financial customers is actually 17% larger than the volumes between dealers.

There are two main reasons for this shift, presented by the BIS authors. Firstly, as a response to competition from multi-bank platforms (eg FXall, Currenex or Hotspot), EBS and Reuters opened up to hedge funds and other customers via prime brokerage arrangements in 2004 and 2005, respectively.

These platforms became active arenas for proprietary trading firms specializing in high-frequency trading. Secondly, due to increased concentration of FX flows in a handful of major banks, top-tier banks have been able to net more flows internally. By internalizing trades, they can benefit from the bid-ask spread without taking much risk, as offsetting customer flows comes in almost continuously.

Not only did this give rise to the need to trade FX in larger quantities and to re-balance portfolios more frequently, but it also went hand in hand with a greater demand for hedging currency exposures, according to the BIS authors’ findings.

Among the currencies of advanced economies, FX turnover picked up the most for countries that also saw significant equity price increases. In the case of emerging markets, turnover mostly increased in currencies where local bond market investments offered attractive returns.

In the late 1990’s, FX trading was mainly the domain of large corporations and financial institutions. Banks charged small “retail” investors prohibitively high transaction costs, as their trades were considered too tiny to be economically interesting. This changed when retail-oriented platforms started offering online margin brokerage accounts to private investors around 2000, streaming prices from major banks, and EBS platforms such as FXCM and OANDA were noted in the example by BIS authors.

New types of participants have entered, such as retail investors, high-frequency trading firms and smaller regional banks. Their business model was to bundle many small trades together and lay them off in the inter-dealer market.

With trade sizes now much larger, dealers were willing to provide liquidity to such “retail aggregators” at attractive prices. Retail FX trading has since grown quickly. New breakdowns collected in the 2013 Triennial show that retail trading accounted for 3.5% and 3.8% of total and spot turnover, respectively.

The largest retail volumes in absolute terms are in the United States and Japan. That said, Japan, which has a very active retail segment, is clearly the biggest in spot. In April 2013, retail trading in Japan accounted for 10% and 19% of total and spot, respectively.

Retail investors differ from institutional investors in their FX trading patterns, noted BIS authors. They tend to trade directly in relatively liquid currency pairs rather than via a vehicle currency, and the retail figures in the 2013 Triennial were noted as lower than the level King and Rime (2010) reported, based on anecdotal evidence.

BIS authors suggested that the recent poor returns on popular strategies such as momentum and carry trades, indicate that growth in the retail segment may have slowed.

While such a causal relationship may exist between volumes and popular strategies such as that of the carry-trade, Forex Magnates opines that retail volumes have more than offset any such dip in volumes attributable to poor returns on popular strategies, even as the exodus of assets under management (AUM) from major currency funds have taken place, as evidenced by volumes reported to Forex Magnates by retail brokers as reflected in our QIR research.

The full BIS Quarterly Review December, 2013, International banking and financial market developments, can be found on the BIS corporate website.

The Forex Magnates latest QIR report can be purchased directly through our website.

1) can an article be done specifically addressing how aggregation and internalization of trades are done? It would be interesting to show the rest of the retail forex community that even at the bank level, ‘b-booking’ exists. 2) Did the BIS survey say which retail/wholesale platforms were in the most use for algorithmic trading? I’m guessing mt4 has a lot to do with it. Can you tell the top 2-3 algo platforms for Japan specifically? 3) did BIS go into any details on how the increased liquidity/algo trading affected swap rates? This more competitive environment may be the reason why… Read more »