After expanding its market share of the exchange trade equities space following the successful acquisition of the New York Stock Exchange (NYSE) Euronext, the IntercontinentalExchange Group is at it again with the Singapore Mercantile Exchange (SMX) as its latest successful acquisition, according to an official company announcement today.

The deal, previously announced in November, was successfully completed after regulatory approval from the Monetary Authority of Singapore (MAS). The acquisition has been widely estimated to be valued at $150m, and as covered by Forex Magnates when the news broke.

Forex Magnates’ reporters spoke with Claire Miller, a Communications Director with Intercontinental Exchange Group who said, “The commercial terms of the agreement remain private, however, ICE acquired 100% of the Singapore Mercantile Exchange to become a wholly-owned subsidiary of IntercontinentalExchange Group.”

Subsequent regulatory filings could provide further insight into the details of the arrangement which for now remain non-public.

The group operates a large network of some of the largest market places and clearing houses across North and South America, including Europe, and across multiple asset classes including exchange-traded securities and derivatives, as well as off-exchange, over-the-counter (OTC) products, including Foreign Exchange.

The deal with SMX provides an entry into Asia for both exchange(under SMX) and clearing infrastructure via the SMX Clearing Corporation (SMXCC) for the new group subsidiary acquired under the ICE group.

As previously announced, SMX, including the SMX Clearing Corporation (SMXCC), will continue to be based in Singapore and operate as a separate recognized body with its own independent board of directors, including Ang Swee Tian, the former President of the Singapore Exchange (SGX).

The exchange and clearing house will transition from existing technology to the ICE trading and clearing platforms in due course, and according to people familiar with the development, the group will consult with its customers and regulators to determine any new product offerings.

Also as mentioned in the prior announcement in November, ICE anticipates there will be a period of business transition in which ICE will implement technology changes and, in consultation with market participants, clearing members, and regulators, will evaluate the product and clearing strategy of SMX to ensure the offering meets market participants’ needs in the region.

A diagram of an overview of current exchange infrastructure technologies utilised at SMX, excerpted from the SMX corporate website: 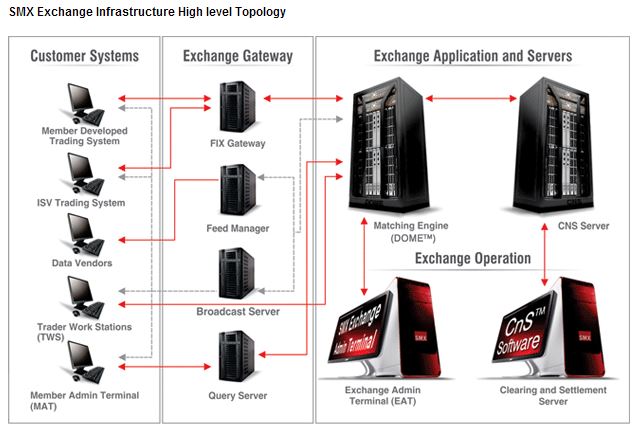 While the SMX already offers a handful of FX Futures offerings, including exchange-traded base metals and precious metals, this could be expanded upon following the transition of ICE technology and further consultation, as noted above.

This could include Foreign Exchange offered by ICE’s Futures business line in the US (including the US Dollar Index, as the appeal of Foreign Exchange in Singapore recently pushed it by a small margin to overtake Japan in the global rankings of market centers responsible for the largest volumes of daily Foreign Exchange turnover, and may include other listed or OTC derivatives that may be subsequently offered on the SMX, now part of the ICE group).

The news follows the successful closing of the NYSE Euronext deal, as noted above, when ICE’s corporate structure re-emerged under the new group name. The intention to spin-off the Euronext business line, and bringing that company public, is something the company is pushing for this year and going with its plan, according to Forex Magnates’ research.