British interdealer broker ICAP has released its average daily volumes for June, further building on the positive results that the firm enjoyed during the previous month. The firm’s volume figures during June signal an 8% increase over May’s overall figures, further demonstrating that 2013 is certainly a year of growth throughout the institutional sector as a whole.

Total overall average daily volumes for June amounted to $851.9 billion, compared to May, where the firm completed the month with a volume of $788.2 billion.

Mid-month, ICAP’s majority-owned early stage funding program Euclid Opportunities made an investment in Enso Financial Management, as well as concentrating further on the ability to engender strategic partnerships internationally in the form of the firm’s Certified Aggregation Partner program, introduced two weeks ago.

With regard to spot FX, the firm posted a 2% increase in average daily volumes during June, arriving at a total of $128.8 billion compared with $126.0 billion the previous month. Although higher, the figures were well below the growth experienced in the CME, which saw its FX average daily volumes reach $146 billion. 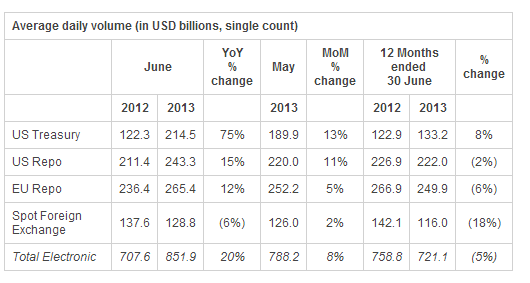