Chicago-based operator of commodity futures marketplaces, CME Group, with some of the biggest commodities exchanges across the globe, including the Chicago Mercantile Exchange (CME) under its subsidiaries, reported today its consolidated financial results for the fourth-quarter (Q1) of 2014. The group’s report reflects a positive turnaround after two quarters of continued decreases in revenues and earnings for the CME.

On a quarter to quarter basis, today’s figures reveal a 13.1% rise in revenues, 40.5% increase in operating income and a 38.4% rise in net income from Q4 2013. Additionally, diluted earnings per share increased by 36.2% and excluding items noted in the reconciliation, adjusted earnings per share went up by 29.7%.

“In first-quarter 2014, we posted industry-leading volume growth of 9 percent, driven by our interest rate, equity index and agricultural products,” said CME Group Executive Chairman and President Terry Duffy.  “Following Federal Reserve comments related to quantitative easing and the target federal funds rate, our Eurodollar futures reached a daily record of 6 million contracts traded on March 19. Further, market participants have begun to adjust their risk management activities in the short end of the interest rate curve, as evidenced by our 47 percent growth in Eurodollar volume in the first quarter followed by 73 percent growth in April.”

“In 2014, we continue to meet the needs of our customers by delivering innovative new products and services,” said CME Group Chief Executive Officer Phupinder Gill. “We recently launched our London-based derivatives exchange, CME Europe, allowing our European clients to manage risk and access liquidity in their local jurisdiction. With London as the center of global FX trading, we will focus on FX futures initially, and add other products going forward. We also launched a Euro-denominated deliverable swap futures product, and plan to launch a North American physically delivered aluminum futures contract in second-quarter 2014.”

First-quarter 2014 average daily volume was 13.7 million contracts, up 9 percent from first-quarter 2013, and included a 19 percent growth in interest rate volume. Clearing and transaction fee revenues were $652 million, up 10 percent compared with the same period last year. First-quarter total average rate per contract was 76.7 cents, down from 78.0 cents in fourth quarter 2013, driven primarily by a higher proportion of total volume coming from interest rate products, which have lower average fees. 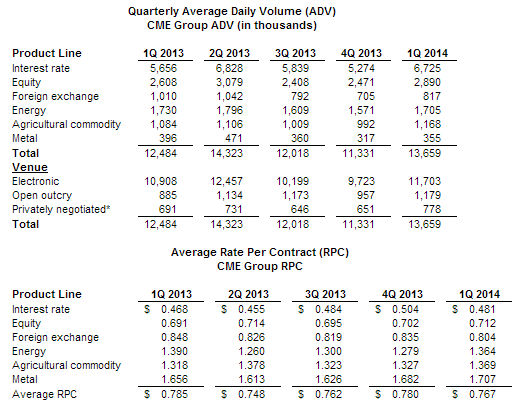 Could you provide the notional value of all of the Eurodollar contracts (ADV) and also all of the contracts that CME trades?

Could you provide the notional value of all of the Eurodollar contracts (ADV) and also all of the contracts that CME trades?