The Tokyo Financial Exchange (TFX) has just released its trading volumes for the month ending November 2015, showing another disappointing monthly report across its margin foreign exchange (FX) contracts traded by Click365. This follows a weak performance in October, when TFX reported a total of just 3,045,750 contracts traded during the month, already a considerable drop of 14.4% MoM from September 2015.

During November, TFX’s Click365 only reached 2,431,472 contracts traded, a drop of 20.2% MoM from October. The figure is even worse when looking at a yearly comparison basis – representing a massive decline of 41.4% from November 2014 in TFX’s Click365 in trading volumes YoY. TFX’s average daily volume (ADV) was just 115,978 in exchange-traded FX margin contracts in November 2015.

In terms of Click365’s trading breakdown by currency pairs in November 2015, the most widely handled currency pair unsurprisingly was yet again the USD/JPY, which took the brunt of the crash, suffering declines of 29.5% MoM and 62.7% YoY  – reaching only 755,389 contracts traded during the month. The EUR/USD pair also took a nasty fall in November as its traded volume reached only 149,146 contracts, a drop of 46.1% MoM. One traded pair that beat the trend and actually shoot up during the month at TFX was the CHF/JPY which rose by 181% MoM to 19,993 contracts. 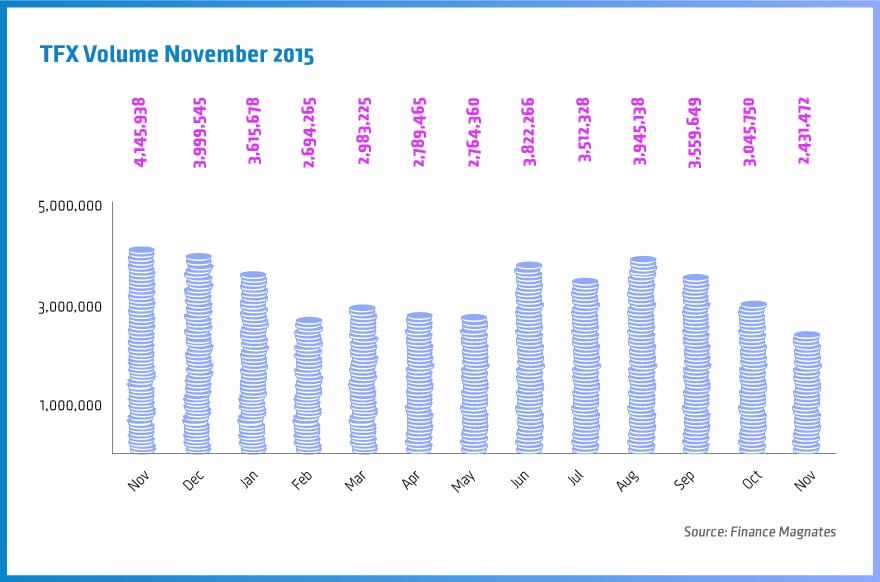