Unpredictability is as much of a bugbear as it is an attraction for many participants in FX, and events surrounding the overall direction experienced in volume have been no exception. 2012 was a year of ever decreasing circles, showing a decline in overall volume worldwide. The Bank of International Settlements (BIS) has released a series of detailed data in its semi-annual report, providing an insight into the possible reasons for the drift in volumes.

Various factors contributed to 2012’s declines, including Japan’s leverage restriction limiting all FX companies to offering their clients a maximum of 1:25.

The first quarter of 2013 however, painted a completely different picture, with volumes surging to record levels in the case of many firms across the globe, the most recent of which was DMM Securities posting a five-fold increase in trading volume after its acquisition of Gaitame Japan.

Industry attempts to monitor these global trends are of importance, and new data released late last week cites adjustments made by market participants to adhere to the impending regulation and emergence of swap futures as being a major factor, albeit in North America in this case.

The data was issued by the BIS as part of its semi-annual OTC derivatives report released on May 7, which examined the industry from June to December 2012 and showed an overall drop of $6 trillion in notional outstanding to a final figure of $633 trillion.

According to Zohar Hod of SuperDerivatives, FX derivatives remain in demand as hedging instruments due to the crucial role they play in facilitating cross-border trade and providing stability to businesses.

BIS said the data masked a larger overall decline due to the depreciation of the US dollar against the euro and Swiss franc from June to December last year, which increased the dollar value of contracts denominated in those currencies.

Hod believes the results reflect the participants’ concerns about the future of the OTC derivatives market as new regulation begin to come into force, namely Title VII rules within the US Dodd-Frank Act.

“Uncertainty in the regulatory space remains the real bug bear for both the buy- and sell-side, which have yet to get a clear steer on the costs of using these instruments to manage risk going forwards,” he said. “OTC derivatives remain an essential and integral part of risk management for institutions across the board, but as expected, this uncertainty has had an impact on overall volumes.”

In anticipation of the new rules, exchanges have offered futures instruments structured to replicate the function of swaps, but which avoid the more costly intensive regulatory requirements for OTC derivatives. Swap futures have seen significant growth since they emerged in the second half of last year, although a growing number of market participants have claimed the disparity between swaps and futures rules forms an uneven competitive environment. 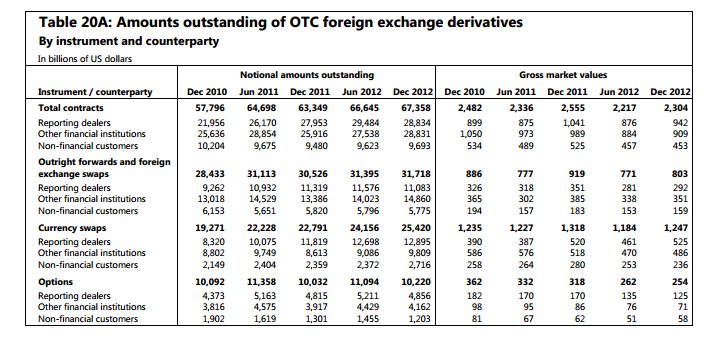