Developer of the popular MetaTrader platform, MetaQuotes,  today announced the results of its AppStore downloads, demonstrating an increased growth across the board.

A new benchmark was reached with the milestone of 150,000 downloaded applications having been passed, up considerably from the 100,000 mark which was achieved during the 2nd quarter of this year.

Earlier in the year the company announced that it had recorded a user base of more than 1,000,000 users on the mobile version of the platform. While the AppStore is still officially in beta mode, more than 1,200 applications have been submitted from over 500 developers, with a total of 200 passing stringent guidelines in advance of the expected official launch of the AppStore (from beta to live). 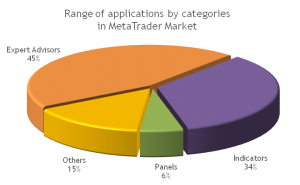 The number of applications that were submitted was 33% higher than the previous quarter, and consistent with the 30% growth experienced during the first three months of the year.

The increase was attributed to an influx of visitors to the AppStore, and a growing number of resales to existing clients with over 36% of buyers having purchased two or more products (+2% from Q2).

Nearly half of all the applications in the AppStore are Expert Advisors (EA), with the highest number of sales represented by indicators, accounting for 45% of the total products bought.

Despite this, EAs far outweighed other product categories in terms of revenue earned from sales, and were responsible for 85% of total turnover in the MetaTrader AppStore during the period. 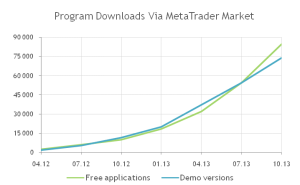 The company compiled an updated list of the top 10 AppStores’ sellers (developers), with  7 newcomers added to the rankings, and noted that 39% of total sales were comprised from among the top 10 sellers from the overall amount of programs sold from the AppStore during the third quarter of 2013.

The Emergence of Competition

Over the past year, MetaQuotes explored further avenues, as it faced an onslaught of competition from new platform providers such as tradable and cTrader, both of which offer user-interactive development environments, and have attracted the attention of four copy trading providers subsequent to the allegations made by MetaQuotes that protocols were being hacked.

Clearly, there has been a fundamental shift in MetaQuotes’ business from both a product perspective and operationally, as the company entered the signals space last year, representing a new diversification for MetaQuotes, as well as having introduced the third party software market place at this year’s iFXEXPO in Cyprus, following a degree of hostility toward developers of the entire third-party ecosystem that had been built around MetaTrader 4.

Although MetaTrader 4 is ubiquitous among retail firms, with further companies recently adding it to their offerings in order to expand into markets with more mainstream client bases, examples being IG Group, AFX Capital and ETX Markets, the FX industry does not allow for those who rest on their laurels, especially with the emergence of new platforms, even for those with large market share.