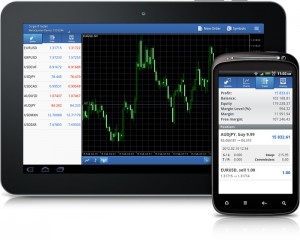 MetaQuotes has announced that it has hit the 1 million mark for users of its MT4 and MT5 mobile terminals. According to the trading platform technology provider, the one million mark comes after hitting 500,000 users five months ago. The mobile MetaTrader terminal is available for both iOS and Android.

Commenting on the achievement, Gaies Chreis, COO of MetaQuotes Software Corp stated “We are greatly encouraged by reaching the level of one million users of MetaTrader mobile platforms. This means that we are on the right track, and our solutions meet the needs of traders” .

According to MetaQuotes, tracking of users is based on ID’s that were added into the mobile platform last year “The statistical data has been gathered during the year from the time when MetaQuotes IDs were introduced in the mobile terminals. These unique identifiers allowed us to determine the exact amount of actually used mobile terminals.”

Overall, the figures represent the growing use of mobile platforms along all forms of retail trading.

Any idea if they are working on Windows RT / Windows Phone 8 versions?

We looking for MT4 for windows phone 8