In the history of the contracts for differences (CFDs) retail market in Europe, August 1, 2018, will be remembered as an important date. On that fateful day, the ‘temporary’ product intervention of the European Securities and Markets Authority (ESMA) came into effect.

Since then, the maximum leverage for retail clients cannot be higher than the maximum of 30:1. After focusing its efforts on retail clients profitability, the pan-European regulator is about to leave matters into the hands of national authorities.

Although no one expects the European regulator to suddenly abandon its product intervention powers, individual European Union member states are preparing permanent measures that are determined by the national regulators. While every country’s watchdog can implement different rules or is simply planning to make the ESMA’s measures permanent, the general rules that are governing the market at a  European level are likely to remain intact in the coming years.

Finance Magnates decided to take a closer look at current trends among European regulators and the progress in their work on making ESMA regulations permanent in the newest Quarterly Industry Report. You can find the sneak peek of one of the key findings from the ESMA’s measures effects below.

European brokers are not required to report and publish accurate statistics on their clients’ FX trading performance. However, aggregated statistics from the Polish market provide an estimation of the conditions on an EU-wide level. The data show that since the implementation of ESMA’s product intervention measures, the average level of profitability of retail investors has increased noticeably.

In 2018, approximately 40 percent of Polish traders made a profit on the Forex market. With Q1 2019, this value reached a record level of 48 percent. In Q2 2018 (before the product intervention measures came into force) it was lower by ten percentage points. 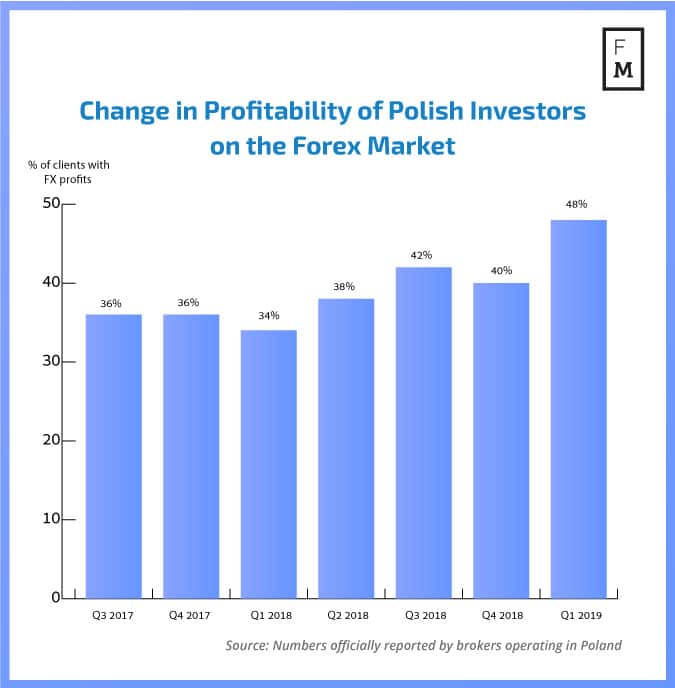 Assuming that traders from other European countries are also performing in a similar way, the results mentioned above are certainly encouraging. That said, another trend in the industry is pointing to a different, more worrisome development stemming from ESMA’s measures.

The product intervention allegedly forced an outflow among investors who are risk-hungry to offshore-based brokers outside the European Union. Australia, among others, turns out to be one of the most popular destinations.

The self-regulatory organization in Poland, the Chamber of Brokerage Houses, polled traders to see what impact the intervention had on their trading. According to the survey’s results, half of the respondents contemplated moving their trading accounts outside the EU.

According to Marek Wołos from the Chamber of Brokerage Houses, “ESMA rules have contributed to the migration of investors to countries outside the EU. The more active investor who is aware and experienced, accepting the increased risk in exchange for the opportunity to make high returns, moves. Such clients are unable to calibrate their strategies to the requirements imposed by the ESMA.”

According to several industry experts interviewed by Finance Magnates, the ESMA will cease to extend the product intervention measures this year, 12 months after it implemented those. This is causing an increasing number of national regulators to propose their own permanent changes. They are set to implement them within the next few months.

To get the full article and the bigger-picture perspective on the post ESMA reaction of FX/CFD industry, get our latest Quarterly Industry Report.