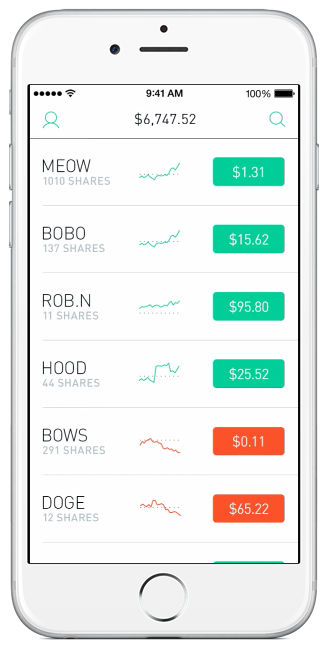 In great news for American penny-saving stock traders, the much-hyped startup Robinhood has finally released an iPhone app on the 11th of December, 2014. The new service offers a slick interface, zero commissions for US-listed securities and it does not require any minimum deposit.

Robinhood, which was announced last December, is Silicon Valley’s latest attempt to disrupt the American stock brokers business model. They plan to grab young people away from online brokers such as E*Trade and TD Ameritrade by promising they will no longer be paying up to $10 per trade.

The revenue is meant to come by offering additional premium services, known as the “freemium” model, popular with mobile and web apps. For example, Robinhood will charge for margin trading.

In the announcement on the firm’s blog, they take aim at the biggest brokers directly by saying: “The markets are a complex system of regulation that may seem daunting to new investors, and with the financial crisis, distrust in Wall Street has never been higher. Traditional brokerages — many of them established in the 1970’s — have been slow to adapt to new technologies. Many still rely on paper-based accounting and the few that have mobile applications, are built off of archaic interfaces.”

The firm says that almost half a million people signed up to join Robinhood over the past year. While this sounds like a great marketing success it also raises the serious issue of the app’s long waiting list. So many people have been waiting since it was announced and they now only launch an iPhone app a year later. Android and Windows Phone versions might come out eventually but in the meantime many fans feel left out by waiting for over a year and then not all getting what was promised.

The startup has raised $16 million so far from influential venture capital funds such as Google Ventures and Andreessen Horowitz as well as celebrity investors Snoop Dogg and Jared Leto.

The offer of zero commission stock trading is not new in the American stock markets. Previous attempts have fallen short in gaining the large user-base needed to earn enough from premium services only, as more wealthy investors require that the broker will likely survive in the long term to trust it with their savings.  It remains to be seen if the major backing of Silicon Valley will help Robinhood succeed where others have failed.

Share this article
Tags: fintech / traders
Got a news tip? Let Us Know

As per Philippe Ghanem the MD of ADSS in a CNBC interview mentioned that ADS daily volume around 5 $Billion, so I’m wondering why ADS is not listed in forexmagnates QIR volume reports!!!

Hi Ron, I was always curious how the retail volume figures were collated for the quaterlt review. Is it just down to a relationship of trust between you and the brokers giving the volume figures?

@Ron Clear and thanks.

The revenue will also come from selling their order-flow to the highest bidder..

even then they need lots of accounts and trades to survive.