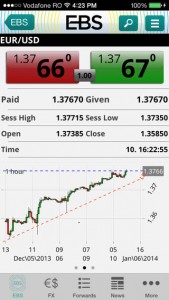 EBS has announced the launch of Watch EBS, a new spot FX app. Similar to other FX apps on the market, the new Watch EBS products provides users with real-time spot FX pricing, charts, ability to create portfolios and news updates from FxWirePro. The new product is a white-labeled version of NetDania’s popular mobile app.

In order to distinguish the Watch EBS offering from the standard NetDania app, FX pricing is based on actual top of book quotes available on EBS Market’s array of spot, NDF, precious metals and forward rates. An interesting feature is that spreads can be customized based on user preference. What Watch EBS doesn’t do is allow EBS customers to access their accounts to place trades. However, this isn’t much different from the bulk of institutional facing FX apps which have focused on providing market data without trading functionality.

For EBS, the launch of the app is the firm’s first foray into creating a more extensive suite of mobile trading products.  The Watch EBS launch also fits into the overall trend of general adoption of smartphones. While users may have no issues downloading random games and widgets, when it comes to more serious app categories, mainstream developers continue to see interest for their products, such as most popular free health apps being dominated by software produced by established medical industry names. Along the same lines, in announcing EBS Watch, the firm has claimed that the current rendition was based on interest received from clients. Such interest would indicate that among their customers, there is a preference for sticking with trading related products from familiar firms instead of migrating to nearly equal apps from lesser known developers.

For NetDania, a provider of trading and market data tools to institutions and individuals, the partnership brings a well-known client to its group of customers. After focusing on tools since its founding, NetDania has also recently launched a new cross-system trading platform which has received favorable reviews from Forex Magnates’ sources. Therefore, onboarding EBS as a client is expected to assist NetDania in gathering exposure as a  solution for higher-end institutional trader needs.

On this, Stig Brylle, Group CEO & Founder of NetDania, commented in the firm’s public statement “We are very pleased to be selected by EBS. It is a strong message from a market leader. I believe they have made a pro-active technology decision.”

Upon announcing the new app that is being made available for iOS, Android and Blackberry users, Viral Tolat, Chief Technology Officer of EBS, commented in the firm’s public release, “EBS Market is widely recognised as the industry leading reference rate. In an ever-changing market, our customers need to remain close to their trades and mobile devices play an important part in facilitating this.” Tolat added, “Following customer interest, we launched Watch EBS to provide enhanced connectivity to the FX markets, allowing them to access research and analysis, dynamic charts and real-time news on-the-go.”