Marking the usual end of year slow down in trading volumes, as many traders eliminate positions, which was already felt in October since the summer’s peak – ICAP’s fx volumes were down 11% year on year. Below you’ll find ICAP’s daily FX volumes averages month by month for the past 2 years. Excluding this summer’s peak – overall trend is not positive.

London, 6 December 2011 – ICAP, the world’s leading interdealer broker, announced today that average daily electronic broking volumes on the BrokerTec and EBS platforms in the month of November reached US$770.7bn, a decrease of 7% year-on-year.

Average daily spot FX volumes on the EBS platform in November were $144.6 bn, a decrease of 11% over the previous year.

These volumes reflect the well-reported slowdown in November due to general market uncertainty and a difficult comparator given a very active November 2010, our second strongest month last year.

ICAP reports all of its electronic broking volumes on a single count basis. 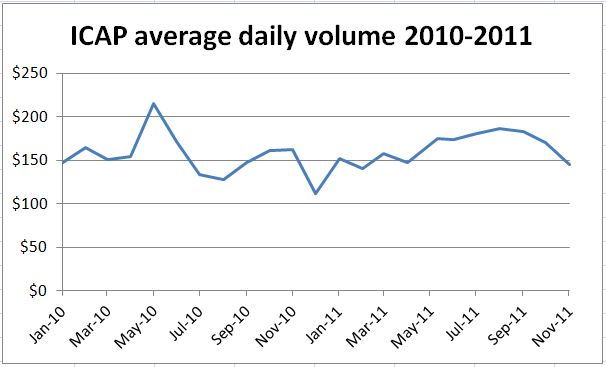