Photo: Bloomberg, Cristiano Ronaldo of Portugal takes a free kick during the team's 1-0 defeat by France in a semifinal match at the 2006 FIFA World Cup in Munich, Photographer: Adam Berry/Bloomberg News
Share this article

Foreign exchange and CFDs trading brokerage XTrade has launched a new marketing effort with Real Madrid player Cristiano Ronaldo at its core. The company has developed an online portal for the fans of the football legend, where they can get dry stats about the player’s career as well as follow his social network feed.

Xtrade is using the site as a client on-boarding portal and is going to hold a draw for customers that sign up for an account with the brokerage and execute two trades. The main prize for the lottery is a trip for two to Madrid, where the client and his companion will have a chance to see Ronaldo play.

Xtrade signed a sponsorship deal with Ronaldo as global ambassador back in March. The move happened just ahead of the European Championships. The company has taken a different approach to most other brokerages when it comes to football sponsorships – while the bulk of the industry is looking to partner up with different clubs, XTrade’s approach is allowing the company a more cross-border access to a wider fanbase.

While certain clubs have worldwide fans, their core base is usually focused on their home country. In the case of Ronaldo, XTrade is getting to an audience that is more global. 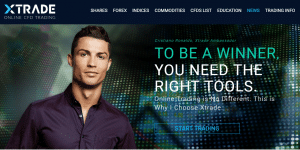 Commenting on the launch, Director of Corporate Communications and Events at XTrade, Kyley Picov, said: “We are delighted to be working closely with one of the world’s best footballers and look forward to interacting with his millions of passionate fans.”

Cristiano Ronaldo himself also commented on the launch of the digital hub, “There is no easy way to become the world’s best. The only way is through perseverance, practice, and more practice – until perfection.”

Ronaldo was in the spotlight during the European football championship in France this summer. He scored 63 goals in his 133 appearances for Portugal and led the national team towards winning its first championship in July.

Share this article
Tags: real / xtrade
Got a news tip? Let Us Know