TradeProofer.com, a new website that is building a community of crowdsourced trading spreads and execution data, has released its stats for February. The system compares broker spreads of numerous brokers with its combined data showing currency by currency averages for bell curves for last month.

Similar to other broker spread monitoring services, TradeProofer aims to distinguish itself by collecting data from traders instead of brokers themselves. The long-term benefit is that once the service grows in size, beyond just spreads, TradeProofer should also be able to  provide crowdsourced trader execution quality. As its name goes, the goal is for users to eventually be able to ‘proof’ their ‘trades’ by comparing execution and spreads from their broker to the crowdsourced community data.

As part of its current information made public, the monthly TradeProofer analysis compares overall spreads being shown per currencies. In addition, they rank brokers by cost per currency, combining both their spreads and commission charges. At this point, without including execution data, the broker rankings can be debated. Also, the list of brokers is limited by community users, so there are some larger names not included in the data. 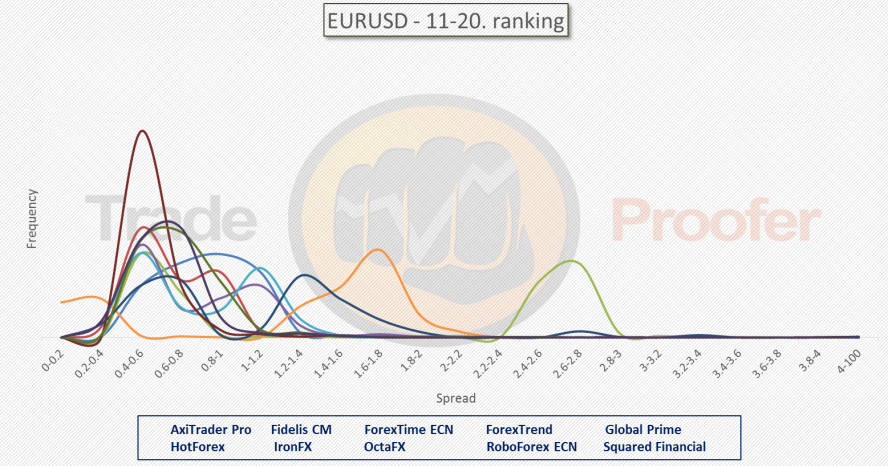 What is interesting about the findings is seeing the variance of spreads provided by floating spread brokers. While a broker will primarily show tight floating spreads 99% of the time, during those 1% periods, pricing can become quite wide. These findings back up what traders will often report in forums, that spreads can be deciding factors since the market can disappear in volatile periods.

Another interesting item is that the data reveals sweet spot areas of spreads in the market. Among all brokers who charge a commission, their core floating spreads for the EUR/USD are in the 0.4 to 1.0 pip level the majority of the time. This compares to non-commission floating spread brokers where the sweet spot is around 1.4 to 2.4 pips of spread. For traders, the data could be used to determine what commission they should be willing to pay compared to using a no-commision broker.

Share this article
Tags: traders / trading
Got a news tip? Let Us Know

Tradeproofer and MyFxBook spread monitor have confirmed what I’ve known for a while now: most brokers do pad the spread somehow, either at their feed level or they negotiate with the LP’s privately (and can legally say ‘we get the feed directly from LP with no markup’). Thankfully these tools have made the industry pricing more transparent. The width of the spread can definitely affect entry/exit points for day traders. Market Makers do include the ‘adverse selection’ into their spread to guard against losing too much money. But ECNs, exchanges, etc are supposed to create clear, consistent trading rules for… Read more »