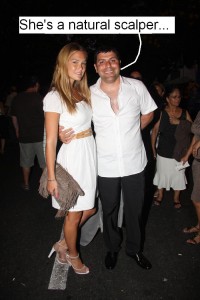 In the best Forex marketing move ever Teddy Sagi made the impossible link between Forex and modeling. The image on the right will surely become an iconic image for aspiring Forex traders – days of Football stars dating Supermodels are so 2008, Forex and Supermodels are IN!

Teddy Sagi is the man behind the Playtech empire – being one of the first in the world who recognized both the potential of Online Gambling and the White Label/IB partnerships. Teddy managed to build a leading online company with only $2-3 million – a number that today isn’t sufficient to do anything – and floated it on the London Stock Exchange at the value of ~$1 billion. Subsequently he earned a nice exit and still managed to remain as the largest shareholder.

It has long been rumored that Teddy plans to take over the Forex market as his next move and I even wrote about 3gforex being his company. Current rumor is that Teddy’s Forex child is GoForex.com. It appears that 3gforex (site is down) and goforex.com are the same and that Teddy has begun his Forex market assault with a marketing budget in the range of several tens of millions – competing with the biggest Forex brokers out there.

Goforex.com says little about who owns the company and only states that it is registered and regulated in Cyprus. Safecap Investments Limited is listed as the owner of the company and besides a brief mention on the Cyprus regulatory site it doesn’t appear on the Internet at all. The administrators for 3gforex and goforex share the same number althoughthey are registered by different companies. Goforex.com uses ACT Forex’s software.

But enough of this boring stuff. Teddy is also strongly linked to the stunning Israeli supermodel Bar Refaeli (ex Leonardo Di Caprio). Not much is known about the alleged relationship but the two have been spotted several times together.

Gambling and Forex pays off people!

I’m sure she loves him for his dashing good looks and winning personality. Having worked with Playtech licensee casinos i get the feeling its a company that is going to dominate the online gambling space. They seem to be first and most aggressive entrants into every new net casino niche – progressives, mobile, bingo, poker, live gaming. You name it they do it – and very well.

Sensationalist journalism is so pre-2001, and we people tend to make an elephant out of every ant we encounter. I’m not sure at all that what this Model has to do with this Millionaire is at all romantic, she is famous enough and beautiful enough to attract any person, rich or poor, powerful or not. Jumping to infantile conclusions for the sake of a “scoop” is imbecilic 😉 Personally, I think this is mostly innocent, and if you follow her around, you’ll see she meets with other guys as well. Maybe she has a cause she wants to promote, and… Read more »

Teddy is a great guy and an amazing business man. I’ve known him personally for a number of years and he deserves anything he has. I wish him all the best … even if these days i work for his direct competitors 🙂

He is a very professional and ambitious guy. No doubt. He can take over the forex market…