Forex Magnates has discovered that Swiss FX firm, Dukascopy Bank SA, is launching an app for mobile phones and the web called Dukascopy Connect. The new app is a free instant messenger that is also connected to Dukascopy Community, the firm’s social network.

Instant messaging apps have returned to the headlines of the global financial press recently after the social network Facebook paid $19 billion to acquire the WhatsApp messenger. Cyber security and privacy is also a hot topic these days more than ever, thanks to the revelations of Edward Snowden about the NSA worldwide spying network, leading many to look for more secure and trusted means of communications. Dukascopy Connect seems to come at a perfect time to gain from both of these trends.

Reviewing the product page for Dukascopy Connect, it is clear to see the company is putting a lot of emphasis on privacy, trust, confidentiality and secrecy as to the reasons why users should choose their app over the many other messengers, building on the strong reputation of Swiss banks in keeping private accounts. 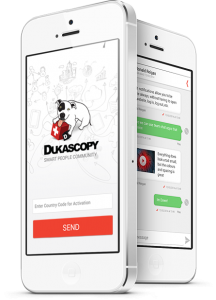 The app is not aimed specifically at FX traders as the markets are not mentioned at all in the description of the messenger on Dukascopy’s website nor on the different app stores, but as anyone who signs up to the service becomes a member of the firm’s social network it might help enhance the company’s brand and help it reach new potential clients.

The most interesting feature in the description of the app is the promise of the possibility to “make cash transactions to anyone in your phonebook.” This is not something that is available in the popular messaging apps like WhatsApp and Facebook yet and can also be beneficial to Dukascopy if it connects users to its bank services.

After finding out about the app, Forex Magnates contacted Luis Sanchez, Vice President and Head of Institutional Sales for Europe and America at Dukascopy for a comment. Mr. Sanchez said that the messenger has been under development for the past year and was initially only meant for internal use in the bank to protect the security of its data but later it was decided to release it to the public.

“Right now we have secure connections via HTTPS and WSS protocols,” said Mr. Sanchez. In the near future personal chats will be encrypted based on private security keys, meaning that all the chat data will be encrypted on Dukascopy servers and will not be transparent to the firm itself. Estimated time for implementing this feature is about two weeks, according to Mr. Sanchez.

Forex Magnates asked when will this new tool will allow direct money transfers and Mr. Sanchez explained that it will happen in about two months from now due to the time it takes to implement the solution on the server side. When it is ready, both sides will not have to have the app to make a cash transfer but rather only the one who starts a transaction must have the Dukascopy communicator and account for money transactions.

Lastly, Forex Magnates asked what the aim of offering cash transactions is, whether it is to allow users to fund their Dukascopy FX accounts. Mr. Sanchez answered: “The main idea of Dukascopy Connect is to provide a new service to the clients that will use it and serve all the people that need to send funds abroad in a secure, fast, easy and reliable way.”