While only a small group of companies, shares of publically traded brokers have been on a tear since the end of last year. Leading the pack has been FXCM, whose $19.15 price of its shares have doubled this year. Not far behind are shares of GAIN Capital (GCAP:NYSE) which at a recent $7.50 have nearly doubled from the all-time low of $3.86 that was hit last November. Along with the overall gains in the stock market and for brokers, GAIN benefited from a solid second quarter earnings report, where the broker record revenues and earnings per share of $0.44. Following the earnings report, shares rose from $5.50 to a 52 week high of $7.86.

Although, falling slightly in the two weeks since reporting earnings, shares still remain well above their pre-news level. While equity traders are enthused by the prospects of a cheap stock and potential for increased profits due to synergies with GAIN’s planned purchase of GFT, insiders are selling. Leading the sellers has been Mark Galant, GAIN Capital Founder and current Board Member, as well as former CEO. Taking advantage of the run-up, Galant has been a steady seller this month. According to SEC filings, in separate sales, Galant has sold 300,000 shares this month, accounting for 27% of his position held under his name, and dropping his stake to 781,958 shares (over 270,000 shares are owned under the Galant Family Trust name).

Galant has proved a savvy seller, as similar but smaller share disposals were executed in July. Those sales caught an earlier rally in GAIN Capital above $6.00 before they fell back towards $5.50. The selling also comes after GAIN Capital rebuffed an attempted hostile takeover by FXCM. At the time, GAIN’s board rejected the offer, believing it to undervalue the worth of the broker. Nonetheless, the current sales do suggest that controlling insider stakeholders may not be opposed to selling the firm, as much as looking to receive the right price.

In relation to the above mentioned FXCM offer, it’s worth noting that the share swap was based on a 0.3996 calculation. As such, even after shares of GAIN Capital have risen, at a current $7.50, they are still below the 0.3996 offer, which calculates to $7.65. Therefore, traders may be viewing the broker as ‘still in play’ and including the FXCM offer as a rough estimation for GAIN’s shares along with the broker’s own fundamentals. 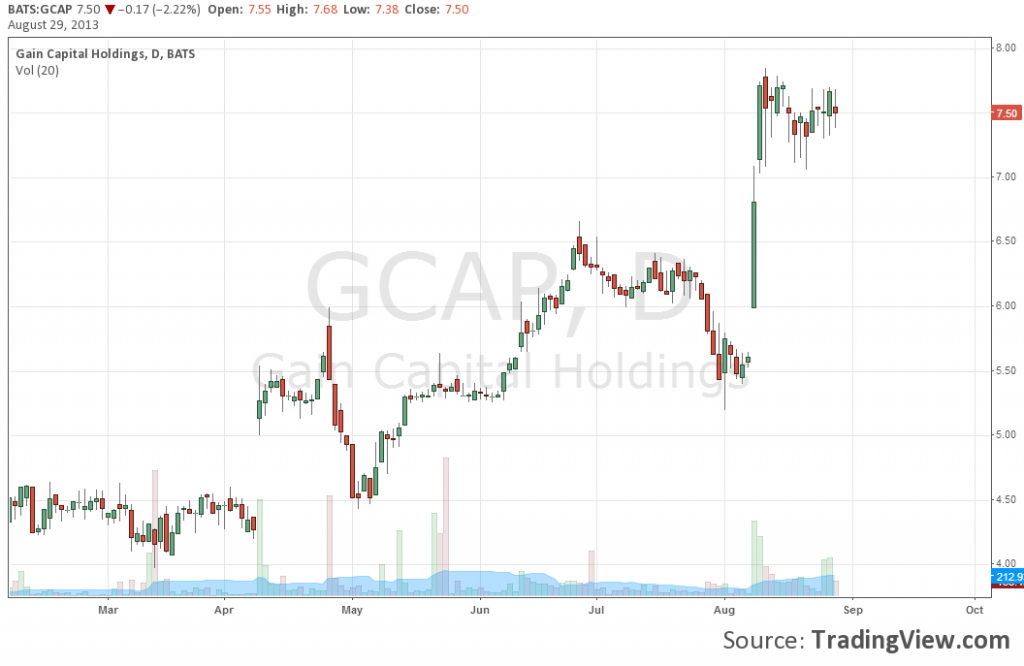