UK-based London Capital Group Holdings PLC (LON:LCG), traded on the London Stock Exchange (LSE), announced details today of a restructuring proposal aimed to help strengthen the company’s position. The deal will inject £10 million into the company, effectively boosting its regulatory capital and resulting in the stake of the majority shareholder of LCG, Charles-Henri Sabet, rising to 83.33 per cent.

Finance Magnates spoke with London Capital Group Holdings PLC (LON:LCG) CEO Charles-Henri Sabet, who confided that ahead of the upcoming July 6th vote, shareholders who were notified yesterday of the upcoming general meeting will have a chance to vote via proxy on a new deal designed to remove the company’s debt to GLIO.

The deal is a widely expected outcome from a convertible note loan which GLIO made to the firm back in 2014. The deal will effectively remove the debt part from the books of the company opening the doors for expansion and freeing up capital for further expansion into Asia and Europe.

London Capital Group Holdings PLC (LON:LCG) had taken out a 7-year loan from GLIO that accrues 5% interest per annum, and the proposed deal will enable the loan to be reimbursed. The funding would be facilitated by GLIO helping to underwrite the new offering and partaking in related commission benefits. As described in the release, GLIO currently holds convertible loan notes with an outstanding principal amount of £13.3 million. 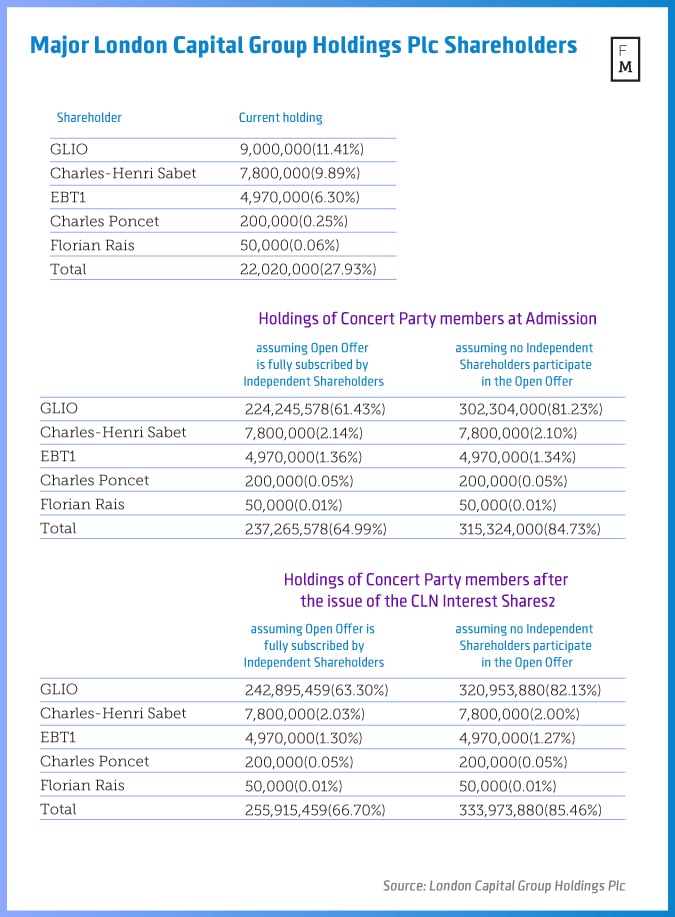 For existing shareholders, the deal is a dilution to their holdings in the company. Existing shareholders will be able to purchase additional shares at an issue price of 5 pence per share at the new offering if they so desire. GLIO’s stake in the company would rise from 11.41 per cent to 81.23 per cent, as per the update, with Mr. Sabet’s stake (including his holdings vio GLIO) rising to just over 83.33 per cent.

As background, the original investment from GLIO was approved by shareholders during the company’s July 3rd 2014 general meeting. After that deal transpired, Mr. Sabet became executive chairman, then CEO, and three months afterwards appointed a new management team.

The capital reorganization was required as the new 5 pence offering would be at an 18% discount to the prevailing rate of LCG’s stock price (around the time of the recent filings) and lower than the value of existing ordinary shares. Following the announcement, the share price of LCG dropped over 16 per cent to just above 5 pence per share.

Following the SNB event last January which affected LCG, the company had marked a period of poor financial results which were below the expectations set out by investors. With 2016 starting with a ‘good Q1’ and “fantastic volatility” as explained by Mr. Sabet to Finance Magnates during a call today, the firm is looking to turn around its fortunes.

With the second quarter of 2016 having been slower for many market participants, including LCG, the summer months could be another period of consolidation as they are typically slower for the FX and CFDs trading industry. With the deal, LCG expects to reposition itself alongside its growth prospects, which included the migration of all of its direct clients to the Surecom platform.