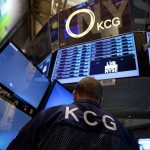 New Jersey headquartered KCG Holdings, Inc. (KCG), has today released trade volumes for the month of November 2013, where average daily FX volumes were $29.6 billion, and thus dropped Month-over-Month (MoM) by $200M, or barely seven tenths of a percent from $29.8 billion reported in October.

The multi-asset independent securities firm offering investors a range of services in market-making and agency business across asset classes, product types and time zones, averaged $26.8 billion dollar volume traded, 4.7 billion shares traded, and 4.0 million trades per day in U.S. equities. Foreign Exchange trading through its KCG Hotspot brand saw $29.6 billion per day in notional dollar volume, as noted above and over 21 trading days in November, and was up 37% when compared to the same month last year, according to the official press release.

November FX figures are higher by $600M than the monthly average of ADV which stands at $29 Billon calculated over the last twelve months (Mean Average) including November. 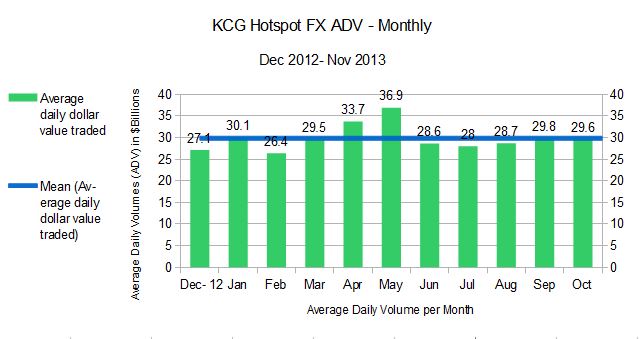 In the report, KCG Hotspot was again the spot FX reporting venue to post year-over-year growth according to its description against other major reporting interbank and interdealer platforms.

The top 5 currency pairs (as can be seen in the graphic above) remained unchanged from the prior month. EUR/USD and USD/JPY saw slight decreases from October, dropping off by 0.05% and 0.85% respectively, while the latter 3 pairs have slightly increased in concentration. AUD/JPY dropped off 4 spots to the 17th traded pair versus 13th in the prior month for KCG Hotspots volumes traded on its ECN, while USD/ZAR pair set a record high at 1.42%, and EUR/SEK, USD/SGD and EUR/NOK all exceeded 1% for the first time.

As per figures compiled in its monthly statistics information report for November 2013, trading activity in Asia and the Europe sessions increased by a respective 0.7% and 1.2% in November, while the Americas session decreased 1.9%, as can be seen in the excerpt below:

Interestingly, while KCG had YoY increases in November compared to YoY decreases reported by other major competitors, its MoM decrease in November (albeit a slight one) fares with increases from those same competing providers MoM. This could indicate an inverse trend of flows during that static-snapshot of time, that since changed, as can be seen in the excerpt from KCG’s November compiled statistics:

Under its Group through the reported press release on the KCG corporate website, the company reported the following metrics across its Global Execution Services segments:

As for the overall market conditions in November, consolidated U.S. equity volume averaged $226.6 billion in dollar volume and 6.1 billion shares traded per day.

Share this article
Tags: brokers / november
Got a news tip? Let Us Know