Interbank FX has recently launched a new and very interesting service – a web page that shows aggregated results of its real time performance. The only other broker that is working hard to become transparent is FXCM which publishes its financial results even though it’s not obliged to do so by any authority.

Interbank’s performance page shows different metrics, which allows a new and existing client to review Interbank FX’s performance real time and in the future compare it to other brokers, which will hopefully emulate this full disclosure.

Interbank FX displays spreads from US, EU, Asian and Overall sessions from the past day. The tables show lowest spread per currency pair as well as an average spread. This is a definite answer to all other brokers who claim to have spreads as low as let’s say 1 pip, but in fact their average spread can be 4 or 5 pips with 1 pip appearing for a few seconds only during the day. Average spread allows you to analyze and compare the spread you are offered with other brokers to the actual spread Interbank FX offers. Don’t be fooled by “typical” spreads published on some broker sites – which exclude spreads that aren’t “typical.”

As low as timing:

While spread tables are not the most innovative feature in the market the Rejection Rates is a whole new transparency level. Rejection Rates is something people used to only guess so far and most of the new traders were fed with rumors and had to read other people’s opinions on various forums. These opinions are of course subjective, and mostly guesses and misconceptions. 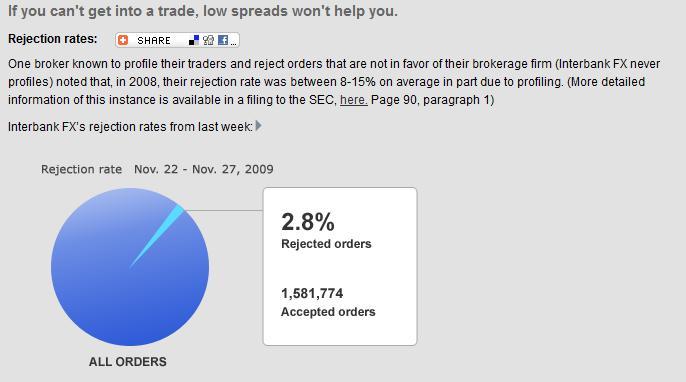 Here for the first time a broker actually displays and updates its own weekly rejection rates – and a trader can objectively analyze the rejection rates and decide if this is what they are interested in.

Another very important metric is Execution time which allows traders to analyze and understand how long on average for their order to be executed. This is absolutely necessary for more sophisticated traders and money managers/algorithmic traders who need to know these things well before deciding with which broker to trade.

i think ibfx is improving 🙂 transparency is great, but their targeted competitiveness through real performance is even better…

it was during the last week that i first ever noticed my orders being slipped in my favor, something that hardly occurred before.

i think ibfx is improving 🙂 transparency is great, but their targeted competitiveness through real performance is even better…

it was during the last week that i first ever noticed my orders being slipped in my favor, something that hardly occurred before.