Along with reporting their Q2 financial report after the close of trading today, FXCM has released its July trading metrics. During the month, Retail volumes were reported at $317 billion, 13% below June’s activity and 33% above the same period in 2014. On an average daily volume (ADV) basis, trading was $13.8 billion during July which was 16% below June.

In the broker’s institutional business, FXCM reported ADV of $8.9 billion during July which was 14% lower than June and 22% below the same period in 2014. Overall, total institutional volumes were $205 billion for the month.

In other notes, FXCM reported that their retail tradeable accouts decreased 16%, or 29,482 to 158,887. FXCM pinned the decline in accounts to a dormancy fee that was charged in July, “resulting in a number of accounts no longer qualifying as tradeable.”

Overall, FXCM’s July trading metrics are similar to declined experienced at other brokers and trading venues.  After a healthy June, summer trading appears to be in motion with EU Grexit speculation not being enough to keep traders interested during July. 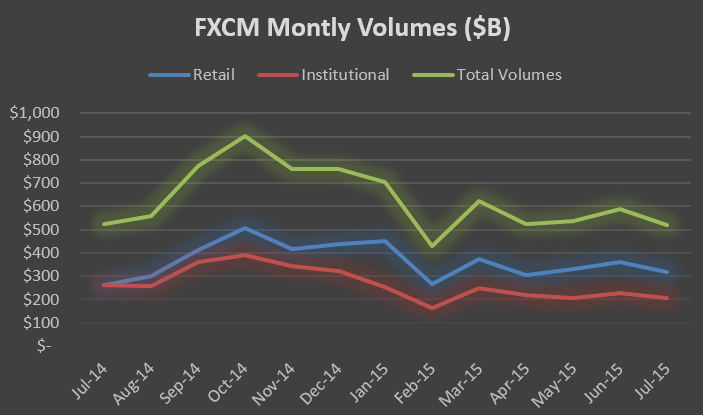