FXCM recently soft launched its own app store. The idea is to provide tools that would compliment the trading platforms (TS2 and MT4) and cater to specific needs of some traders. This is the very familiar Apple’s model whereby a complete eco-system is created and users have everything they need at the same place. Few months ago ActForex, one of world’s largest forex platform providers, released an App Store already built in into its platform. It seems this is becoming a major trend in the market.

I’ve had the chance to interview Sameer Bhopale, FXCM’s CMO, who had this to say:

“The idea behind FXCM’s App Store is to deliver clients what they actually want – traders require apps, indicators and strategies depending on their trading preferences. We’ve received numerous requests from news, range, trend traders and others for specific solutions which led us to start developing this app store. We will launch it this week and traders will be able to download from a very large selection indicators, strategies, and custom apps for MT4 as well as for FXCM Trading Station platform.

At this point all apps are created by FXCM and our flagship programming services department. In the near future we will open it up to third party app developers. There are about 60 apps already available and we are working on introducing many more and will also be taking requests and see what is required. We will open a section for developers where they will be able to see the requirements and in the meanwhile we are working on our vetting process as the apps need to pass compliance to make sure they comply with our standards and requirements.

There are both free and paid apps and you need a demo or live FXCM account to be able to download/install them.”

Ø What is FXCM Apps?

FXCM Apps is a new online marketplace where traders can download special “apps” that customize their trading experience. There are apps for all types of traders whether news, range,or trend traders; apps that add new charting functionality; apps that make it easier to analyze the market, apps provide enhanced reporting tools, enhanced trading functionality, and apps that just make trading simpler and custom to an Individual. Anyone can browse the store but the apps only operate in an FXCM account. And that’s the kicker!

Ø What is Our Primary Goal?

Obviously the nature of this endeavor models an already global phenomenon which is Apple. Phrases such as “apps” are now part of everyday language. But if you think about it what is an “app”? Most would say an app applies only to smartphones & tablets. Why? When I think about an app on your smartphone I see it as a vehicle to customize your lifestyle/daily experience such as wanting an app to play games, or an app to exercise, or an app to read up on news etc. The platform just happens to be the Apple smartphone or any smartphones that use Android. Well FXCM is taking the same concept but applying it to your trading life. Every trader has different needs, wants, essentially different ways to customize how they analyze and trade the market. The FXCM App store is meant to cater to that need.

One of Apple’s greatest successes is the “ecosystem” they have created through iTunes and the App Store, which offers music, movies, TV shows, games, and other apps that only run on Apple devices (e.g. Macs, iPhones, iPads, etc.). The Apple “ecosystem” has created massive brand loyalty, providing Apple with repeat customers, year after year after year.

By providing apps that allow traders to customize their trading experience and add or improve trading functionality—while, at the same time, limiting the operation of those apps to FXCM platforms—we can increase brand loyalty, account life, and trading volume.

Ø What is Our Long Term Goal?

The initial launch of FXCM Apps will only include apps developed by FXCM Programming Services. In the long term, FXCM cannot create enough apps to ensure that the variety of apps in the store is sufficient to create an “ecosystem” that allows for the above stated goals to be met. So, in the long term, FXCM Apps will be opened to outside developers. This will allow FXCM Apps to grow at the necessary rate required, while also providing the variety of apps required, to meet the above stated goals.

Sample of user guide for aps:

Note: Used as an oscillator, this EA will always have a trade open (once the initial buy or sell trade opens). Trades close when the indicator’s value decreases, and subsequently, a new sell trade is opened. All trades open and close at the close of the current candle. Stops and limits are not used.

Note: Used as an oscillator, this EA will always have a trade open (once the initial buy or sell trade opens). Trades close when the indicator’s value increases, and subsequently, a new buy trade is opened. All trades open and close at the close of the current candle. Stops and limits are not used.

MagicNumber: A unique identifier that allows the EA to account for and manage its trades

LotSize: The number of lots traded 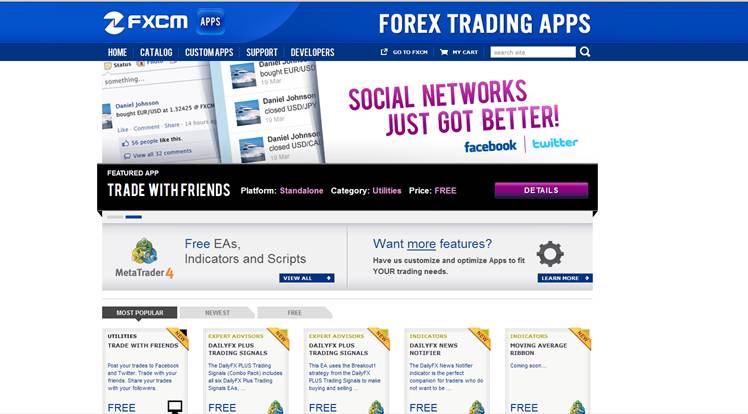 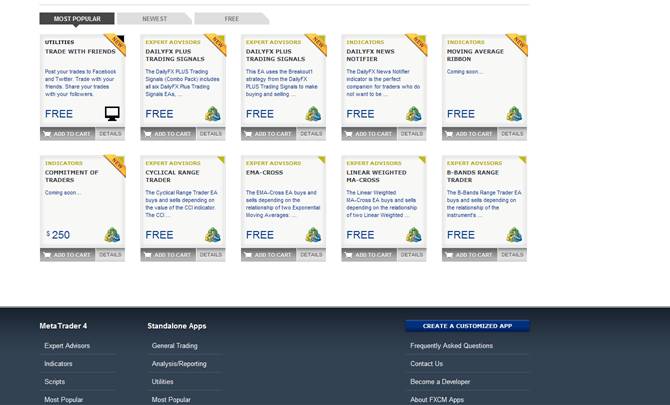