TradeSlide, the FCA regulated investment adviser, and operator of the social trading platform under its brand-name, has re-branded as Darwinex, its new trading name, Forex Magnates reports exclusively on this development.

The company has launched a revamped product after overhauling its prior generation version, as part of the change, and added a principal agent license to execute clients’ trades and hold clients’ funds as an FCA-authorized firm – effective in the last two weeks- adding to its existing FCA licenses as an asset manager, as explained to Forex Magnates by the firm’s CEO.

The company has emerged under the new trading name, with its website Darwinex.com made live just today. The name is short for Darwin Exchange, which looks to use a unique approach to separate investable traders from the crowd, and turning those select performers into a Darwin, or Dynamic Asset & Risk Weighted Investing (DARWIN). Traders compete in a gamified trading challenge called Darwinia, where their performance is ranked in a unique manner according to the company.

Darwin, as the name also implies, shares parallels to the famous biologist Charles Darwin who described the evolution of certain species in his famous writings. Beyond just the name similarity, Darwinex uses that evolutionary concept from Animalia (see screenshot further below), to enable traders to compete in a survival of the fittest game, where it’s not just about trading performance or strategy sophistication, but measures other criteria to separate lucky traders from traders that are having more than just a random bout of performance. Of course, the manner in how exactly Darwinex will try to achieve this will be at the crux of its value proposition.

The first few years for a start-up are crucial since after iterating and pivoting in order to find what works best, the changes in strategy can make or break a business. This is because it costs significant capital to often start and continually optimize a company until it’s successful, and in the realm of technology development for forex brokers and social-trading platforms, fierce competition makes the challenge that much harder.

This challenge also exists because when the market has an idea for a given concept, even when new products arrive that fall into that category, participants may associate it with the closest thing they know of already, even if it is totally different in comparison to the new emerging product – despite it being in the same class or category. The change for TradeSlide appears to be a significant pivot after several iterations from its original minimum value proposition (MVP), from its original product.  A Screenshot provided to Forex Magnates of the new Darwinex interface can be see below: 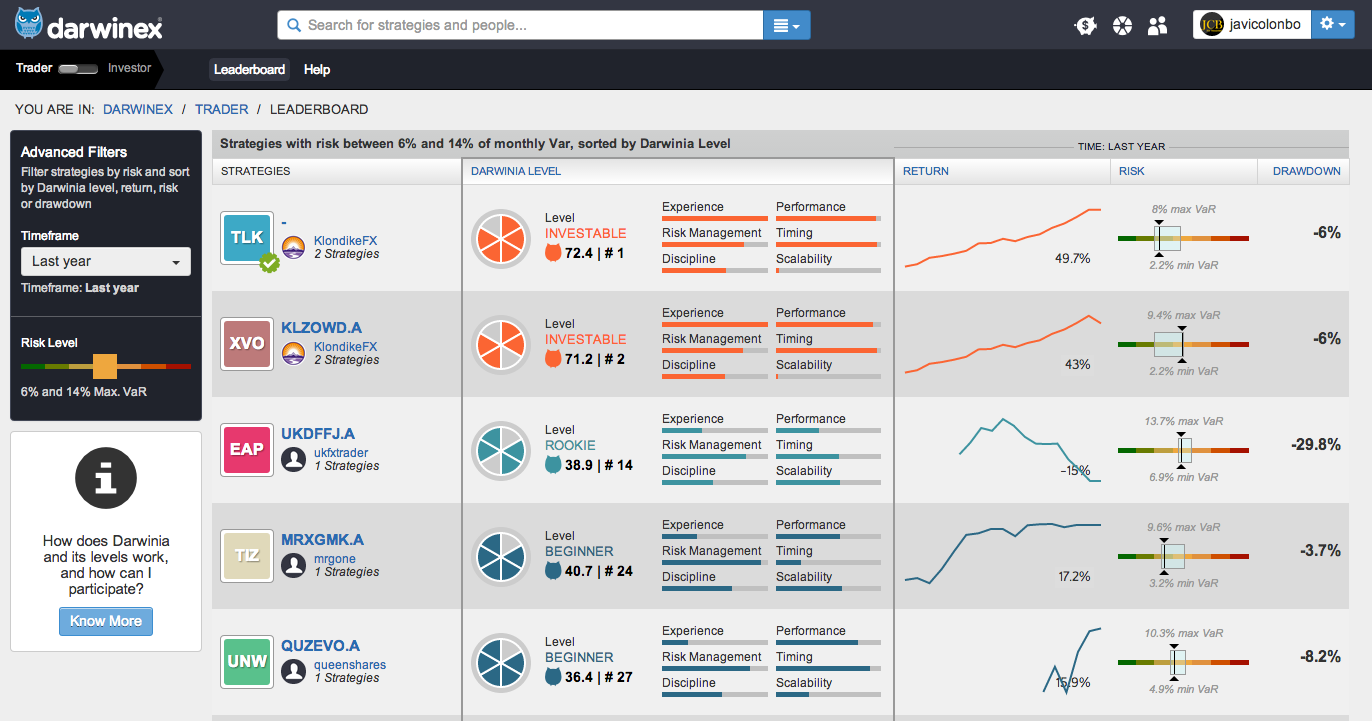 Juan Colon, CEO of Darwinex and TradeSlide Trading Tech Limited, the company behind the brand, told Forex Magnates that the reason the company decided to start its own brokerage was to best align with its client’s interest and help protect their trading ideas and strategies which it considers their intellectual property. The company has just started accepting deposits, and will act as an agent to clients’ trades, in an STP model, and using Prime XM for its brokerage technology, and LMAX for rates and order matching.

Initially the firm seeks to aggregate enough traders into its database, who will have their trading results ranked by Darwinex’s algorithms, and by the 3rd Quarter the company expects to launch its Investable Darwins which will be traders whose results have passed six levels of criteria of filtering to help ensure their performance is in line with what investors would hope to expect in a social trading platform (i.e. consistent risk/reward adjusted returns, over time, etc…).

Mr. Colon also explained that the firm goes beyond what a typical ranking algorithm will look for, when for example calculating various ratios, like Sharpe, Sortino, Burke and other common measures of risk/reward. For example, Darwinex looks at the time the trade was opened and compares it to how that trade would have fared if it was established either before or after that time, in order to best rule out whether timing is random versus non-random, over a large series of trades, and across various time horizons depending on the trade duration.

Mr. Colon explained to Forex Magnates, “To be listed on Darwinex and become a DARWIN, you need to prove the investable attributes at Darwinia,” and concluded, “We´re eager to exchange long-term profits with traders, introducers and brokers who share our view that increased lifetime values are the future of forex.”

The company offers the MT4 platform and cTrader platform, and allows traders to backload their performance into the database for analysis, however, now that the company has launched its own brokerage, rather than offering its services solely to other brokers, it will require clients to use its own demo or live accounts in order to have their accounts become potentially eligible Darwins (i.e. investable by Investors at a later stage).

The challenge with finding great traders is that they can be hidden within the crowd and hard to find among a larger population of other traders’ performance results, since there is a lot of results that can sometimes camouflage the great traders alongside other traders that just happened to be lucky, or ride a trend and make a high return. Therefore, social trading platform technology developers have continually looked to best optimize their ways of filtering their database of traders, in order to best rank them in a meaningful way both quantitatively and if possible qualitatively.

The next dimension to Darwinex’s business model, is where the fun begins. The company is looking to simplify the investing process for investors, by making it very easy to choose investable Darwins. Investable strategies (Darwins), will have already passed the six levels of scrutiny, and will be matched with investors based on their risk appetite.

Naturally the challenge with any business is attracting new clients and traders, so for Darwinex, the company hopes to leverage Introducing Brokers and affiliates that could want a better way to find investable traders in the hopes of making their end-traders money, and thus introduce traders and investors to Darwinex. Having the FCA brokerage license which allows the firm to accept deposits and execute client orders as a principally matched broker, will allow it to focus on its clients without having to rely on a 3rd party brokerage firm.

If the company can succeed in attracting enough traders to sift through and rank their performance, in order to find the few gems from the rock pile, then investable Darwins should be ready by Q3. or about four months away, when the firm plans to offer them to investors.

The company considers itself like a Peer-2-Peer  (P2P) Asset Manager, connecting traders that deliver talent for a payment, and investors that make a payment for talent.

However, following the expansion of social trading platforms and technology, from companies like eToro, ZuluTrade, Tradency, OANDA’s Currensee, Collective2 and MetaQuotes, Leverate and many other firms are either already involved in the space for a number of years or new emerging firms are just getting on the social trading bandwagon, regulators are still trying to determine how to regulate this space in various jurisdictions like the UK.

Forex Magnates intends to cover the subject of copy trading regulatory developments in greater detail in our upcoming Quarterly Industry Report (QIR2) research for Q2 2014. A screenshot below shows the different animal themes used in the DarwinEx Darwinia challenge, as seen on the Darwinex.com website just made live today: 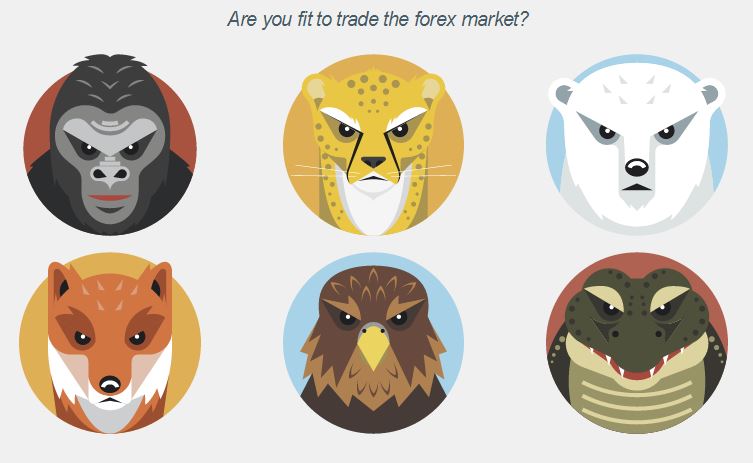 Interesting pivot and company. Wishing you the best Juan!

Hi there Denis and Matthew, thank you both for the good wishes.