Rebranded as Darwinex from TradeSlide in May, the company pivoted from being an operator of a social trading and trader performance evaluation platform, to a fully regulated FCA firm. Having become a licensed advisor in 2013, from the beginning Darwinex showed its intentions to combine both money management products and trader evaluation within its offering.

Speaking to Forex Magnates in the past, and presenting the London Summit last November, the founders related that they viewed money management as an area with coming stricter regulation within the Forex industry. Specifically, based on EU guidelines issued from ESMA in 2012, copy trading was ruled as a money management product, possibly requiring additional forms of licensing from brokers and or trader leaders. For trade leaders and unlicensed money managers benefiting from copy trading programs, licensing requirements are expected to curtail potential profits that they receive for their trading.

To provide a solution for money managers, Darwinex is creating a form of investible approved, or what they call Dynamic And Risk Weighted INvestment (DARWIN). An approved DARWIN is basically an index which customers can invest in, which tracks the trading of strategy creator. Unlike social trading, where copying is allowed of all community members, Darwinex filters for traders who meet their risk and performance requirements. In addition, investors only have access to viewing the index’s performance, without seeing individual traders. The result is that using their financial advisor license, Darwinex acts as the underwriter (for lack of a better term) of the index to its customers, with them having no direct relationship with the money manager.

Having been in development, and the concept pitched to Darwinex customers earlier in the year via emails and webinars, the DARWIN Exchange investors platform is making its first public appearance as the broker announced the demo launch of the product on Friday. Although only in demo, investible money management indexes have shown to have demand from the market. When a similar idea was pitched by PandaTS during the May 2013 IFX Expo in Cyprus, it garnered a positive reaction from attendees who spoke to Forex Magnates about the new product being showcased at the event. Fully developed and operated in beta with a few brokers, the product is expected to go live by the end of the year. For Darwinex though, the index represents a converging of both a traditional brokerage and managed account business model, which is worth watching how it will be accepted by traders and investors. 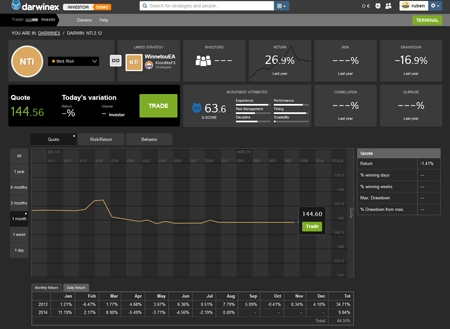