In a shift for the retail industry, the largest losses suffered by brokers after the SNB removed its 1.20 price floor on the EUR/CHF exchange rate were suffered by those using non-dealing desk agency models, as opposed to market makers. The most notable were FXCM and InteractiveBrokers, each announcing losses above $100 million. Their losses are notable as non-dealing desk brokers pass all client risk to liquidity providing counter-parties, as opposed to market makers who warehouse customer trades internally and minimize external hedging.

Affecting non-dealing desk operators this time around was the sharp CHF volatility, which triggered scores of clients to lose more money in their accounts than they had, and resulted in negative balances. For the most part, these negative balances are noncollectable from retail clients, even though brokers themselves are on the hook for similar sized deficits with their liquidity providers.

Non-dealing desk firms also suffered from poor executions from their bank liquidity partners during the move. This ultimately caused client losses and negative balances to be exacerbated compared to prices. As related last Thursday, client notes sent from UBS to their customers explained that pricing during the move wasn’t final and could be restated. This turned out to be the case as several technology providers told Forex Magnates that their execution monitoring software revealed numerous price corrections.

In an extreme example (that affected at least two brokers), Barclays had filled EUR/CHF sell orders at 0.065 (no extra zero) while at the same time EBS was quoting its session low of 0.85. Technology providers that Forex Magnates spoke to corroborated with similar examples of their clients. Firms did state that Barclays and other banks ultimately did provide some price improvement, but often to levels below that of EBS’s low of the day.

Market makers, on the other hand, benefited as counter-parties to customers with Swiss franc short positions. Prior to Thursday’s news, many brokers reported trader short positions to be above 90%. Market makers suffered when the profits of their CHF traders (amounting to less-than-10% of traders) were greater than the client balances of the +90% of losers. As such, if losers lost $10 million with client balances of $500,000, and winners profited $750,000, a broker would come out with a net loss of $250,000.

Market makers were also vulnerable to customers executing Swiss franc buy orders as the currency rose following the SNB’s announcement. Unlike no-dealing desk brokers where client executions are dependent on orders being simultaneously transacted with liquidity providers, market makers are able to (not that all of them do) fill customer orders quicker. However, some brokers have also expressed that CHF executions aren’t final and can be altered after verifying rates with liquidity providers.

Lastly, market making brokers also absorbed losses on hedged positions they took on the Swiss franc. Due to the EUR/CHF holding above its 1.20 price floor for over three years, it attracted scores of traders who bought the forex pair near the floor and profited on small moves higher. As the trade had been performing well for many traders, it led to some brokers hedging a portion of their client’s exposure. While the hedge limited their risk to their customers’ short term profits against them, it ultimately led to losses as the EUR/CHF crashed.

Even attributing losses to internal hedges and customers that were on the right side of the franc’s move, on the whole, market makers performed better than their non-dealing desk brethren who absorbed client negative balances. Initial analysis also appears to show that losses were regional as brokers with higher APAC-region customer bases were less exposed to the franc. As mentioned above, among market makers, there was a variance of results that was dependent on various factors such as EUR/CHF hedging. As such, several large brokers that use market maker models like GAIN Capital and Plus500 reported profits from the move, while CMC Markets, OANDA and IG Group lost funds.

Who are the biggest bucketshops?

The retail forex market is often quoted as having “bucketshop” operators (market makers are called such because they warehouse client trades, or bucket them together and act as the counter-party). The bucketshop description is used to explain why brokers have a conflict of interest with their clients and will often be accused of affecting their customers negatively by playing around with rates and executions. Ultimately, in the zero sum game of the forex markets, many have long believed it’s the banks that are the ultimate bucketeers of the market, as witnessed by the FX fix rates scandal and last week’s subpar executions provided to broker clients that they have a “relationship” with.

Following our initial broker estimates which were published on Friday, Forex Magnates has gained a clearer picture of how well firms performed due to the Swiss franc move. Focusing on brokers that have publically made statements, below is an aggregated list of retail winners and losers who have come forward to verify that they in fact did have losses and, when available, their estimates. In addition are firms that have publicly stated that they were profitable from Thursday. Data will be updated as more information becomes available. 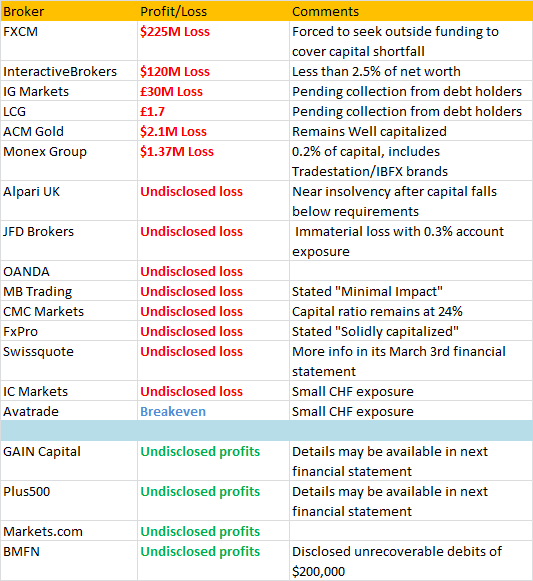 The correct model is a proper hybrid of A/B/C.

You are absolutely right. Plus reducing your exposure/reducing leverage on currency pairs where risks of substantial moves are present.

@Jeff, remind us what the ‘c’ model is? I do agree though that it doesn’t always have to be . But one important discrepancy is that the broker should be obligated to tell their clients what they are doing. In other words, don’t claim to be A-book when you are in fact B-book, etc. What do you think of this being a best practice? Talking with a friend who is a tech partner at a b-booking broker, he said he couldn’t understand why other brokers had to mess around with execution. Clients will 99% of the time lose the money… Read more »

“Clients will 99% of the time lose the money on their own accord.”

LOL so it isn’t anymore 90 but 99% losers, note that Dukascopy observes a client learning curve leading to 35% winners last time I checked. That is how they justify ECN

You know the real problem with MM is about them paying the winners plus they are too greedy on their virtual spreads.

Banks like Barclays should be shut down for such manipulation, how can they possibly manipulate a price to 6 cents when it should be 87. If they dont get shut down the FCA should fine them heavily for price manipulation.

I agree, it is the banks that cause these issues. I wonder if the regulators will take action against Barclays bank. It would be good to see some sort of action taken against them as it would show that the regulators are not tolerating such price manipulation.

For me personally I would like to see banks like Barclays removed from the forex industry altogether, this would be better for all I think.

Add Alpari UK to this list. All their live accounts are frozen and they announced insolvency the next day. They have subsequently retracted the insolvency claim, but they have still gone down very badly. Below is their complete announcement. “The recent move on the Swiss franc caused by the Swiss National Bank’s unexpected policy reversal of capping the Swiss franc against the euro has resulted in exceptional volatility and extreme lack of liquidity. Retail client funds continue to be segregated in accordance with FCA rules. For the avoidance of any doubt and notwithstanding previous announcements by the company, Alpari (UK)… Read more »

Of course the banks would want to bucket retail broker trades. Most of those brokers have anywhere from 70% to 95% losing traders, and as part of their “no dealing desk” business model (which they must really be using, at least in part, if they act as counterparty to large banks at all) so it’s really the statistically smart move to bucket it all for consistent profits in most situations. Frankly, there’s nothing all that wrong with it considering they’re not even in the position to screw with the retail broker’s individual customer withdrawals of profits, etc. And it’s what… Read more »

The banks are the biggest crooks of them all. Fancy showing a price of 6 cents, what a load of rubbish. It is these jokers that create unnecessary volatility for the purpose of squeezing traders out of the market.

@forexmagnates – your photo depicting Cyprus with an explosion is incorrect, unfair, defamatory and to an extent malicious and conniving. I note that you also make absolutely no mention of Cyprus in your article. The fx industry in Cyprus has much room for improvement and is definitely far from perfect, this certainly includes the regulator with its many failings and the numerous shady operators on the island. You have however yet to report of any major brokers failing in Cyprus or the industry blowing up as you incorrectly depict, all while two very reputable and market leading brokers (fxcm, Alpari)… Read more »

Ron, on what information do you base that negative balances are noncollectable please?

Affecting non-dealing desk operators this time around was the sharp CHF volatility, which triggered scores of clients to lose more money in their accounts than they had, and resulted in negative balances. For the most part, these negative balances are noncollectable from retail clients, even though brokers themselves are on the hook for similar sized deficits with their liquidity providers. –

Saxo Bank also must to be added to the list.

It seems they losses are exceeding 500 mln krones. And they are now requesting their customers to cover negative balances.

Hi All, did anyone loose more than they had on ac with cmc on the back of the eurchf “Force Majeure Event”?? pls get in touch smirza_uk@yahoo.co.uk i would like to discuss options dealing with the FOS.

Had anyone had any experiences with IG and their negative balance due to EURCHF?

Barclays didn’t trade on EBS but Currenex and various other ECNs. And the lows on ask prices were 0.72 and they stand legally out there.