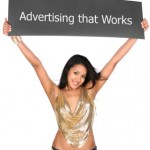 Phoenix reports that 48% of investors ignore online advertising, as many expect these ads to show more than just the company name, and 41% want to be told something about the company.

While this may read as if online advertising is ineffective actually the results are encouraging – 52% do notice online advertising, and this is amazing. We are all used to seeing Forex ads all over the internet and most of us, at least those who are long enough in the business, tend to ignore them. However, many novice traders and other people who are exposed to these advertisement do not ignore them. I’d say the number of people ignoring advertising is substantially higher than the reported 42% but I don’t know the survey’s methodology so it’s difficult to comment on that.

Of course, with any advertising, offline and online, there is expertise and knowledge involved in making it really effective. Some advertisers can spend millions and get zero results. But there is no doubt that online advertisement is much much more effective than offline and is also substantially cheaper. This is why you see 1 offline ad (TV, newspaper, etc.) for about 1 million online ads.

The online advertising is getting more and more competitive as the forex industry itself is maturing. This results in incredible CPM rates at some portals and very high CPC costs (as much as $8 per click, check spyfu.com for details). However new sites and portals are sprawling so the competition for advertisement dollars is growing as well. With both Supply and Demand growing the result should be same average price and larger quantities delivered.

It is also important to read what is really important in the survey results: the notion that “41% want to be told something about the company” – this is the only thing worth considering in this survey in my opinion. If people claim that they notice the advertisement but it doesn’t tell them much this mostly means that the served impressions is a wasted one.

“TD Ameritrade received top honors for the most effective print and TV ad, while an online ad for Scottrade topped the field of Internet advertisers. Least effective was a print ad for ADM Investor Services, a TV ad for ThinkOrSwim, and an online ad for IG Markets.” That’s odd, because I kind of like IG’s ads…