June crude oil futures are expected to get a boost at the start of the week because of the Canadian wildfire. Current reports suggest the fire could reduce production in the area by over a million barrels. The lost capacity is equivalent to well over a third of the country’s typical daily production, and almost all of Canada’s crude from oil sands is exported to the United States.

The news is wreaking havoc on the U.S. markets with prices for West Texas Intermediate oil for delivery in July now trading higher than those for Brent. Despite the support for prices, we are still below the high for the year. If there is a spike to a new high, it will likely be speculative buying. This should not be viewed as a breakout rally, however, since these types of rallies usually end with a sharp break when the news driving the market goes away and speculators fight to exit their long positions.

Investors are also holding more bullish positions than at any time in history, which is usually an indication of an overbought market. In other words, not everyone can be right about the direction of the market so this may be an indication that we are closer to a top than starting another leg up.

Based on the speculative buying this late in the game and expectations that the price irregularity between WTI and Brent crude are not likely to last, we have to conclude that the market is probably closer to a top than the start of a new rally from current price levels.

Additionally, a government shake-up over the weekend in Saudi Arabia may also send a bearish signal to the crude oil market since the new Ministry of Energy, Industry and Mineral Resources, Khalid-al-Falih, is a supporter of lower prices.

The weekly June Crude Oil chart suggests there is room for one more spike to the upside before price and time balance, perhaps putting an end to the current rally. 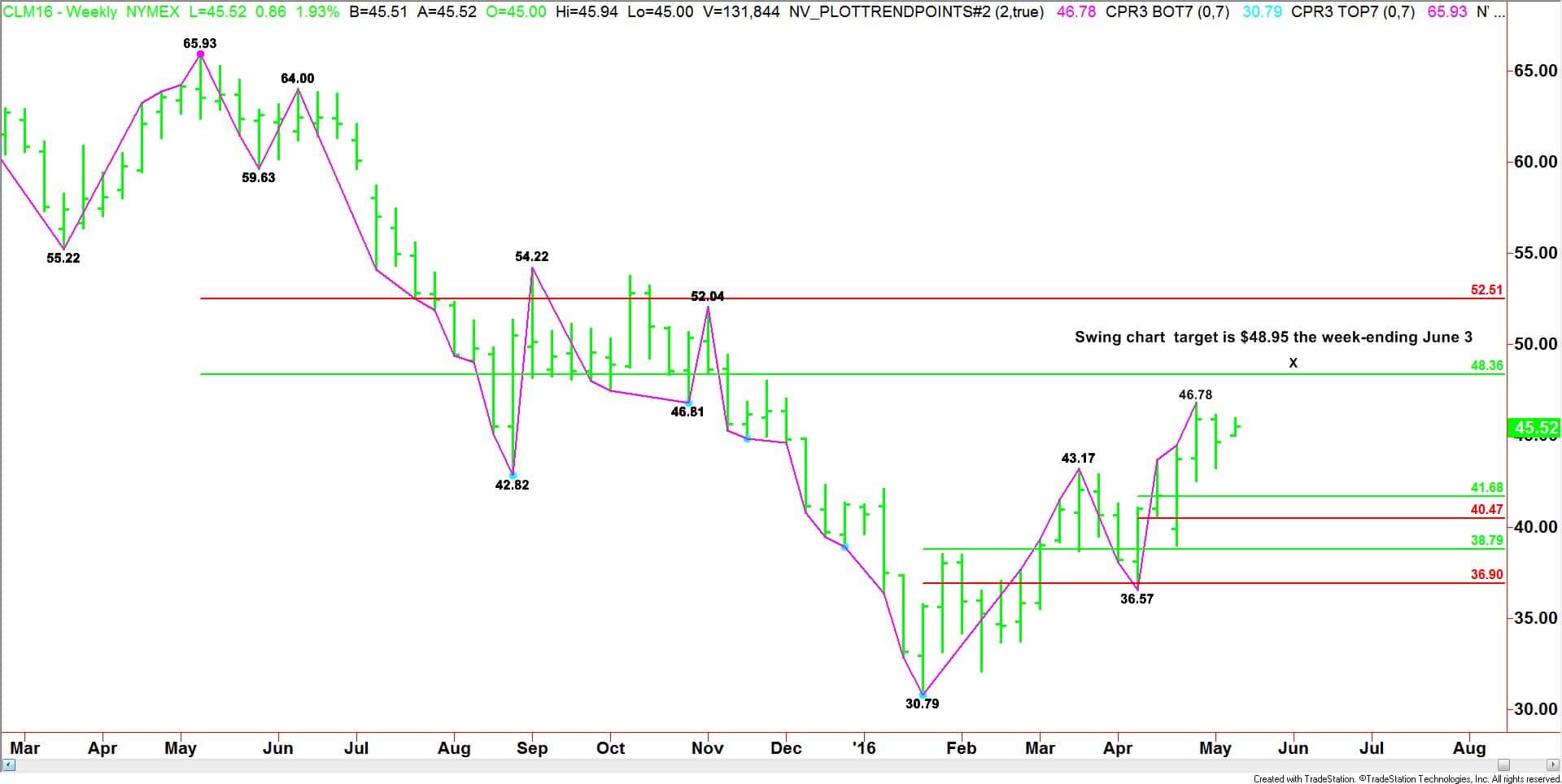 The weekly swing chart tells us that the main trend is up. The trend recently turned higher when the market traded through the swing top at $43.17.

We are currently finishing the third week from the $36.57 main bottom.  If we match the previous rally then we could see a rally to $48.95 by the week-ending June 3. This would put the market a little above the 50% level on the monthly chart at $48.36 and slightly above the long-term downtrending angle at $48.59.

Combining the monthly and weekly charts reveals that we should pay close attention to the price action and order flow between $48.36 and $48.95 in May. Right now it’s too early to determine if it is going to stop the market. In other words, it’s just a target. Upside momentum and buying could be strong enough to drive right through it so I wouldn’t suggest selling a rally into it. However, I would consider selling it on the way down if the rally fails to take out $52.51.

We want to try to maximize our gains during this rally so selling into a rally is not suggested because both the trend and momentum are pointed higher. However, if the market hits resistance between $48.36 and $52.51 and begins to sell off we would like to go with the shift in momentum and sell a break back through the 50% level at $48.36.

In summary, we believe that the June crude oil market is nearing a serious resistance area and is ripe for a correction. However, because the speculative buying is so strong, we don’t want to step in front of it. However, we will consider playing the short side if the buying stops inside our retracement zone and takes out support on the way back down.

We are looking to sell weakness after the market hits resistance rather than selling strength which is a riskier trade since the upside momentum is so strong.

Speculators should be banned from oil trading. They’re parasites, thriving on misery and tragedy.

Crude Likely to Top After Speculative Buyers Exit
James A. Hyerczyk is a financial analyst for FX Empire, a leading financial portal. James has worked as a fundamental and technical financial market analyst since 1982. His technical work features the pattern, price and time analysis techniques of W.D. Gann.
wpDiscuz