Gold prices have been caught in a death spiral since the November 8 US elections, and recently fell to more than nine-month lows as the US dollar continued to assert its dominance on the foreign exchange market.

Gold futures were down $13.70 or 1.2% at $1,178.70 a troy ounce early Friday, their third consecutive drop and lowest level since early February. The yellow metal has declined a staggering 10% since November 4.

The outlook on gold has shifted from bad to worse. The metal is severely oversold, according to the Relative Strength Index (RSI). It is also susceptible to continuing downward momentum.

Price action is also weak, with the 50-day simple moving average crossing below the 200-day SMA.

Bullion has been on a sharp downtrend since Donald Trump was announced the 45th President of the United States on November 8. The president-elect will have the backing of a united Republican Congress to push through massive tax reforms, financial and environmental deregulation and a huge stimulus plan that promises to create jobs and economic growth.

These factors have led investors to turn bullish on the US economy. That bullishness is reflected in the value of US stocks, which soared to new all-time highs earlier this week. 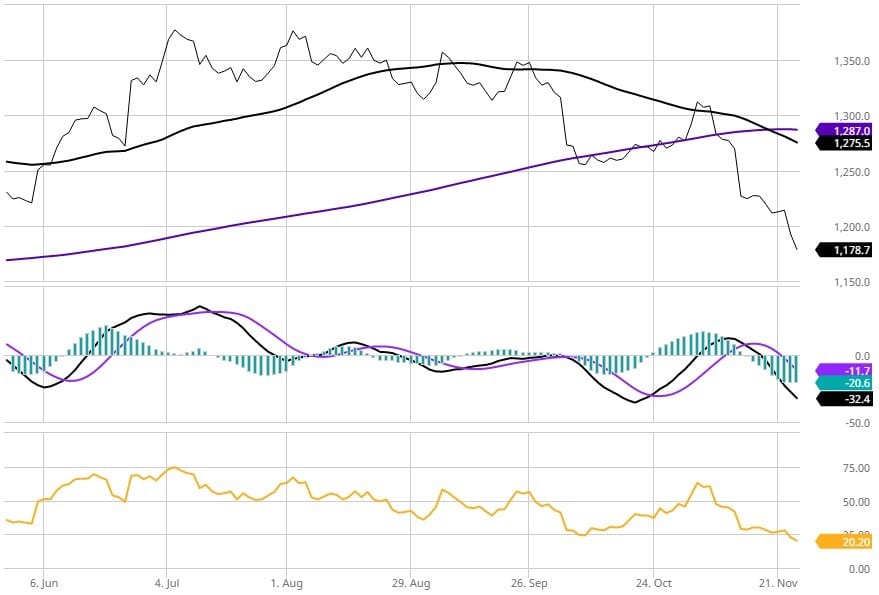 Demand for riskier assets has undermined the appeal of gold and other precious metals, which normally act as a haven against risks.

According to Federal Reserve Chairwoman, Trump’s proposed policies may lead to faster inflation, which could alter the US central bank’s outlook on monetary policy. In practice, this could mean a speedier path to higher interest rates than previously forecast.

The Fed is already on course to raise interest rates next month. In the eyes of traders, a 25 basis-point increase in the federal funds rate in December is all but a given, according to the CME Group’s FedWatch Tool. That view was vindicated on Wednesday after the minutes of the November FOMC meeting indicated that most officials saw a rate hike coming “relatively soon”.

Growing rate-hike bets, expectations for higher inflation and upbeat economic data have combined to send the US dollar to its highest level in nearly 14 years. The dollar index, which tracks the greenback against a basket of other major currencies, has gained 4% since the Trump election. The index closed at 101.70 in a low-volume Thanksgiving session on Thursday.

A stronger dollar is usually viewed as a disincentive for holding gold bullion, especially during periods of rising interest rates. Gold is therefore highly sensitive to fluctuations in the US currency.

The US dollar has surged more than 8% versus the yen over the past four weeks, bringing the USD/JPY closer toward the 114 level, which is the highest since February. The euro is also nursing a nearly three-week losing streak versus the dollar, with the EUR/USD crashing toward the 1.05 region. That’s the pair’s lowest level since last December.

I believe 2 days ago Comex gold was trading at a premium to Shanghai by $36. Interesting.