The prevailing calm in the oil market came to an end this week after Iraq’s oil minister requested that his country be exempted from OPEC’s production freeze, adding to growing skepticism about the cartel’s ability to drain a sizeable supply glut.

Iraqi energy minister Jabar al-Luaibi dropped a bombshell this week when he said his country needed to boost oil production to raise more money in its fight against Islamic State militants. Iraqi and Kurdish forces recently launched a large offensive to reclaim the northeastern city of Mosul from the terrorist group.

Iran, Libya, Nigeria and Venezuela are also on the ‘do-not-disrupt’ list when it comes to crude production. These countries are looking to boost output and may not participate in OPEC’s planned production freeze. Suddenly, the cartel’s pledge to remove 700,000 barrels of daily crude production becomes the sole burden of Saudi Arabia and its Gulf Arab allies.

The Organization of the Petroleum Exporting Countries (OPEC) last month agreed to its first production freeze in eight years, although skeptics believe this will do very little to alleviate the supply-demand imbalance. They cite more efficient US shale producers as the main reason. US drillers have increased operations in 19 of the last 21 weeks. If oil prices continue to rise, US shale will gladly (and easily) fill in the gap.

OPEC is expected to set individual member quotas at its next meeting in Vienna on November 30. 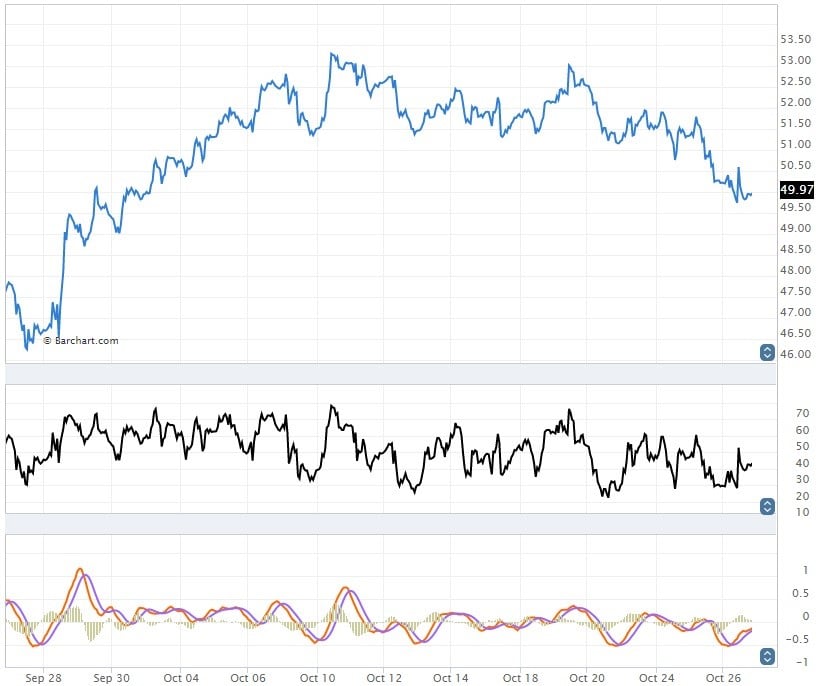 Benchmark Brent crude for December settlement has declined 3.5% since Friday to break below $50 a barrel for the first time in nearly a month. The futures contract closed at $49.83 a barrel on Wednesday, in what was its third successive down session. Since reaching more than one-year highs on October 10, Brent futures have declined nearly 6%. As of early Thursday morning, Brent crude was trading at $49.97 a barrel.

The West Texas Intermediate (WTI) benchmark for US crude futures is also down more than 3% since Friday. WTI settled at $49.12 a barrel Wednesday, a more than three-week low.

While crude prices are forecast to continue hovering around $50 a barrel until next month’s OPEC meeting, discord among cartel members might trigger more volatility in a market already prone to ups and downs. The month-long rally in prices has had little to do with fundamentals and more to do with rhetoric around a production freeze. Without a promise of lower oil production, the market may continue to find itself at painfully low prices. It’s this predicament that is forcing the Saudis to ratchet up efforts to boost prices.