Trader reaction to last week’s Reserve Bank of Australia’s decision to cut interest rates by 25-basis points to a historically low 1.50% indicates that another rate cut is likely coming before the end of the year.

It is also an indication that the market forces may be dragging the RBA towards adopting the unconventional zero-rate monetary policy that is currently taking place in Japan, the Euro Zone and the U.K. The RBA essentially confirmed this path when it said that inflation is likely to stay below or at the bottom of its target range until 2009.

If you missed it, the AUD/USD finished the week higher than it was when the RBA announced its rate cut on August 2. Economic theory suggests that a currency’s value should fall when a central bank reduces its benchmark interest rate. This wasn’t the case, however, as buyers continued to support the Australian Dollar.

If the central bank wants to weaken the currency in order to improve the economy then it is going to have to hit the markets with another rate hike before the end of the year. And if this doesn’t work, they have to do it again in early 2017 until they get their expected result.

The RBA could get some support if the Fed raises its benchmark rate by 25 basis points before the end of the year, but this is not guaranteed either. Although the Fed acknowledged the current strength in the U.S. economy, which was confirmed by the latest U.S. Non-Farm Payrolls report for July, it continued to express caution about raising interest rates too soon.

Perhaps, the Fed is not really concerned about stopping the U.S. economy’s upside momentum, but rather the effect that an interest rate hike could have on the global economy, given the movement of major central banks towards a negative interest rate environment.

The Reserve Bank of Australia has meetings scheduled for September, October, November and December so there is plenty of time to cut rates again.

In its quarterly statement on monetary policy, published on August 5, the central bank extended by six months the time in which inflation will continue to perform below expectations. This is the main reason why we expect another rate cut during this current easing cycle. 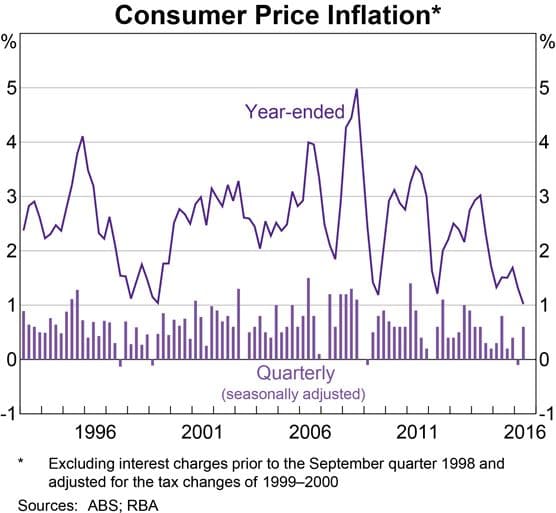 RBA officials confirmed this when they wrote in their official statement, “Domestic factors such as heightened competitive pressure in retail markets and low wage growth have put downward pressure on retail inflation over recent years and are expected to persist for some time.”

After last week’s rate cut, financial markets are already pricing in a 56 percent chance of another official rate cut before the end of the year. This would take the RBA’s cash rate into an area that the Reserve Bank has previously indicated it would consider more aggressive measures such as quantitative easing, or the even more exotic “helicopter money”.

Stay tuned to the AUD/USD over the next several months because this Forex pair could be the most active and most volatile with traders and investors getting hit from all sides including further accommodation by the RBA and the possible move towards normalization by the U.S. Federal Reserve.

RBA Will Have to Turn It Up a Notch to Weaken Australian Dollar
James A. Hyerczyk is a financial analyst for FX Empire, a leading financial portal. James has worked as a fundamental and technical financial market analyst since 1982. His technical work features the pattern, price and time analysis techniques of W.D. Gann.
wpDiscuz