First of all I would say that I am bearish on oil. I am certainly not the only analyst that is bearish in the world. There are very few reasons to be positive about “black gold”. The negative arguments include:

Brent Crude is certainly not alone in sell-off in the commodities complex, with base metals equally being smashed from pillar to post. Perhaps one of the few technical analysis charts out there that is more bearish than Brent Crude is that of NYMEX (West Texas Intermediate). In my opinion, both oil charts look extremely bearish.

Specifically looking at Brent Crude, the price has now fallen by 33% since the peak of the rebound back in early May. Technically, momentum indicators remain extremely weak, all moving averages are falling and it would appear that a retest of the January multi-year low at $45.20 is highly likely.

That suggests that all price and momentum indicators are pointing to lower prices. The big concern is that WTI oil has already broken to levels not seen since early 2009 and also shows no signs of stopping. There is therefore very little reason to think that the January low on Brent Crude will hold. 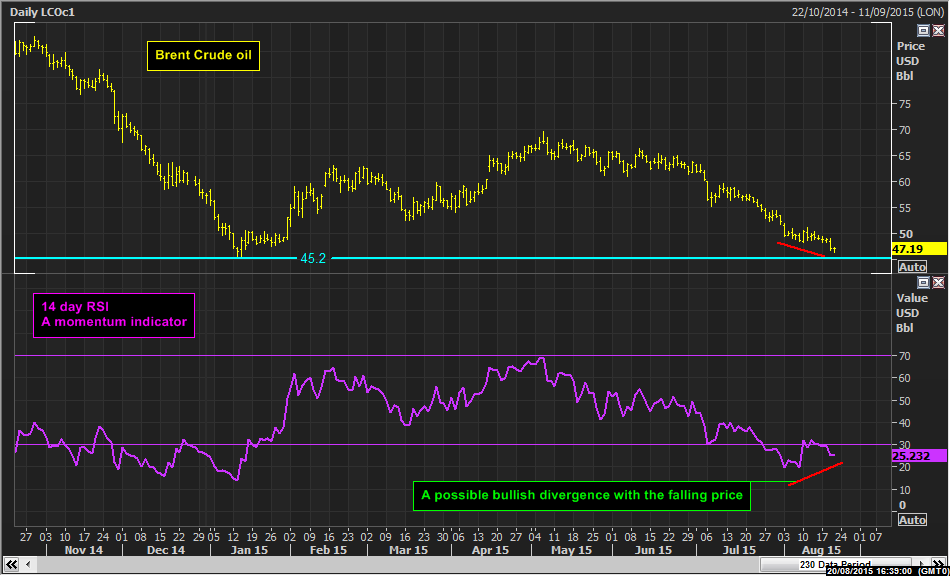 The only thing I can say as a positive over the longer term is that pretty much everyone is bearish on oil. That should mean that at some stage there will be selling pressure drying up and the price will begin to bottom. It is impossible to say exactly when that will be as supports seem to be counting for little right now. If Brent Crude breaks through $45.20 support then then next key lows are around $40 from 2008/2009.

In terms of a medium to longer term position building, you would think that at some stage there would be a technical rally (as I said above). In the longer term (i.e. 6 months to a year) the price is also likely to have rallied above current levels (c. $47 on Brent Crude, $41 on WTI) with this recent sell-off sure to see an unwinding process at some stage.

However, as ever, it is all a question of timing. It is probably best to hold off and wait for a bottom to start to form before building a position. As yet, there are no confirmed signals, but there may just be an early sign of a bullish divergence on the RSI.

If this is confirmed it could suggest that downside impetus is waning and might give an early sign of a bottom. However, until the confirmation is seen and solid support is formed, it is almost like catching a falling knife at the moment, something that can be very painful in the short term at least.

My own analysis says we are going to hit $58 in the next few months if not sooner.

@Safvan what’s that based on?