I write this blog in the hours prior to the FOMC making its latest decision on monetary policy. I can almost guarantee that the Fed will not hike rates tonight (I say that as a man unwilling to stake his house on such a gamble, but there again, a gambler I am not). So instead of wasting time talking about “will they, won’t they?” I will quickly brush that discussion aside and instead focus on one more meaningful. When will the Fed raise rates?

First of all, let me say that I believe that the Federal Reserve will move on rates either in September or December. I am ruling out both tonight (i.e. July) and October purely because of the logistics of the meetings. The world’s largest economy and most important central bank changing their interest rate for the first time in over six years will be huge news in the finance world.

September is a possibility. There will be more information on Core Personal Consumption Expenditure which is a key indicator for the FOMC to make its judgment on inflation. However, it would appear that inflation is the main sticking point at the moment. With unemployment at its lowest level since May 2008, that part of the Fed’s dual mandate is already seemingly a ticked box. However, inflation is still proving to be stubbornly low.

As early as Monday,  the 3rd of August, it is possible that we could already be ruling out a September rate hike again. If the core PCE drops below 1.2%, this would be the lowest reading since March 2011. It would be very difficult for the FOMC to argue for a rate hike under those circumstances.

This could also be exacerbated by the Average Hourly Earnings that come in the Non-farm Payrolls report. Ideally, the FOMC would also like to see wage growth picking up again. Although the FOMC is forward looking and may view the fact that as the unemployment rate gets lower, the reduced slack in the labor market will begin to drive wage growth naturally which will filter through to inflation, it is still a difficult argument to make with so many doves sitting as voting members on the committee in 2015. Consensus data is forecasting zero month-on-month growth again, meaning no pick up the 12 month data. So this could again be data that prevents the Fed from moving in September.

I see these two data points as being key to the decision over September or December. Janet Yellen has already alluded to the fact that all things progressing as they are will result in a rate hike in 2015. My expectation is that enough questions will be posed by data points in the coming days that will prevent a September hike. With October then ruled out on a technical basis, that leaves us with December.

To my mind, the reason it will be December and no later, is because the data is reasonably supportive, but also because the FOMC will be sending some concerning signals to the market if it holds off until 2016. Perhaps the window of rate lift off is smaller than we think, and by December it could be a case of now or never. 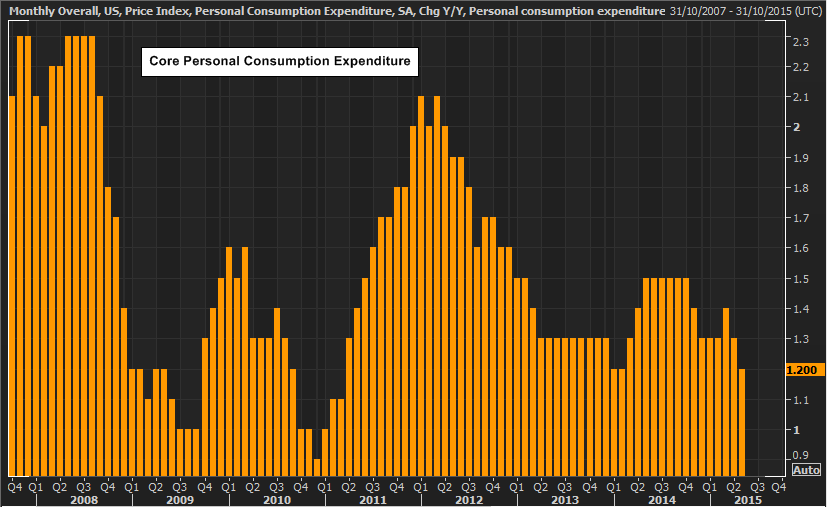