For forex traders, it’s that time of year again. The time which harbours a love–hate relationship.

While many traders love the time off the screens, spending time with their families and having a break, it’s not that infrequent to find a few bemoaning the fact that their broker has shut down, disabling their platform and thereby eliminating the ability to make a single trade.

In theory, one might think that since these holidays are the busiest time for commerce with money flowing like no tomorrow, a 24 hour global market should allow ample opportunity to trade.

Except, of course, it’s primarily the banks who are the major movers of the currency markets. Hence, when they’re closed, it’s natural that everyone else, including forex brokers, follow suit. Come on, even bankers need a holiday, right? As a result, forex brokers shut down for a few days.

As we all know, even on the days when they allow some trading during this period, there’s going to be terrible and unpredictable price movements with higher spreads than normal. Trading during this time is folly, especially if you’re a scalper.

Here’s an example from the USD/JPY on the M1 timeframe. Overall, USD/JPY is usually smoother in price action (along with AUD/USD) compared to most other pairs, but even here you can see it’s not a pretty picture. 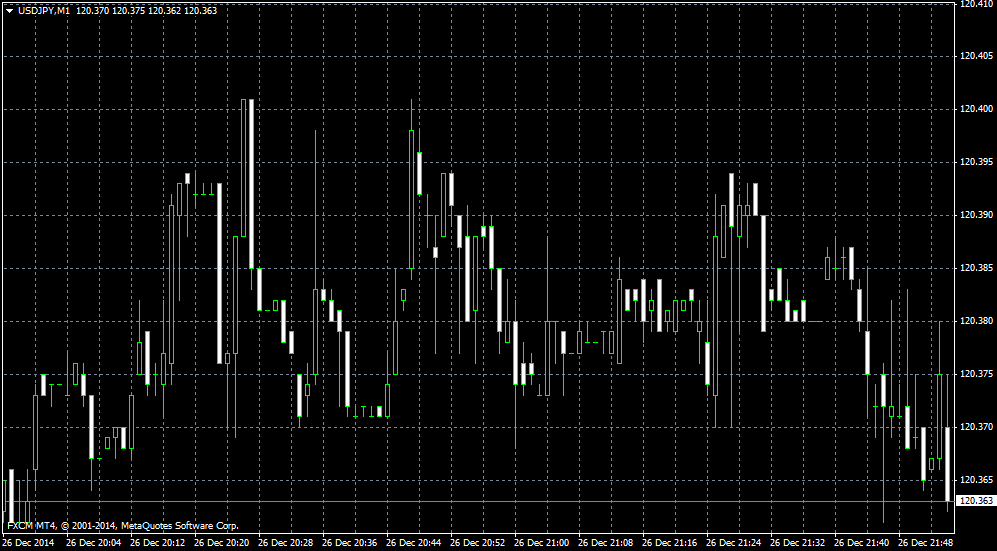 Take a look at the multitude of appalling price action occurrences:

– Consecutive long candles, followed by many short candles which really skews with the ATR

– Whipsaws are visible within quite a few of the candlesticks

– Often you’ll see gaps appearing in data with price stalling for a few seconds, only to jump rapidly to an unexpected price

All of these negative trading attributes virtually makes any sort of technical analysis very difficult, indeed. Just try using some classic trading tools and indicators such as the Bollinger Bands or the Awesome Indicator.

Even tried and tested indicators that analysts have been using for decades are no longer reliable. Overbought or oversold on RSI or Stochastic doesn’t mean much any more.

So with barely any liquidity (which can result in your orders being executed in slow motion), and with barely any volatility (which means your 61.8% Fib retracement level may never get hit!), there’s no point in trying to make any pips during these winter nights. The best thing to do would be to grab a mug of your favourite hot beverage, lay back and watch the news or football instead.

There’s some top-flight football on during these days in the UK. The Premier League matches can be a good way to take your mind off trading then, if you forget for a minute who are the sponsors of an increasing number of clubs.

If you wish to become a Guest Contributor, please get in touch with our Community Manager and UGC Editor Leah Grantz leahg@forexmagnates.com

[…] recently, in the US, Capital One also began offering P2P transfers by joining a jopint venture with Bank of America, J.P. Morgan Chase and Wells […]

Is this trading advice? On forex magnates? I would think it would be best served on the experts section.

‘Money never sleeps pal’ Michael Douglas’ character Gordon Gekko said in Wall Street. Look at the prices moves we had today in Eur/Usd or Oil. And I still remember on 31st December 2008 Eur/Gbp was wild.

This is one of the most pathetic articles I’ve seen on Forex Magnates to date. On the same level as a teenage chat room parlance and market understanding. Still using 1 minute charts on MT4 and calling himself a “trader”, Talking about “liquidity” as if widened retail broker spreads reflect anything significant. Forex Magnates has just legitimised an incompetent trader and made a laughing stock of itself. Quote: “So with barely any liquidity (which can result in your orders being executed in slow motion), and with barely any volatility (which means your 61.8% Fib retracement level may never get hit!),… Read more »

Modify your trading as its thin

Thank you for the heated feedback. We are taking our readers’ view into consideration.

Dear oh dear. Your comment suggests there are no successful traders who are scalping on the M1 timeframe on a consistent basis.

Well, I’ve got some more “pathetic” news for you mate; these scalpers actually exist, they are consistently profitable, and they are real traders. Yep, even on on the mighty MT4 platform.

Oh and by the way, I’m really enjoying the footy, old chap.

@Ash My comments DO NOT suggest there are no successful 1M traders. My comments clearly state that YOUR approach of watching football over the holiday period due to your perceived understanding that trading conditions are unfavourable is simply naive and indicates your trading understanding is low. You do not think like a trader Sir, but rather you think like a typical white-collar 9-5 employee. i.e. ‘what is the minimum required of me before I can do something interesting’. In my experience, this type of person is never a successful trader long-term. The fact that you are using MT4 1m charts… Read more »

@ Olaf. I was waiting for your answer, because I was almost certain you’d land yourself in a hole: “My comments DO NOT suggest there are no successful 1M traders.” Nonsense, that’s exactly what they suggested. Read your initial post again. “If there are successful 1m retail traders out there… its very few indeed.” Unsurprisingly, your initial insinuations are now creeping out of the woodpile. “Overall I would even go as far as to say that anyone trading 1M MT4 looking for scalps with a retail broker is not a trader.” You just couldn’t help yourself could you? Well done… Read more »

As I feared, my words fell on deaf ears. I simply don’t have the time to go through the dozen reasons why you are so wrong. Your lack of awareness of your trading environment is simply shocking. For all the other readers of this post, here is a fine example of the typical mindset of the retail FX trader. Very confused and begrudgingly stubborn when it comes to reality. I don’t dismiss the ECN MT4 industry in one swoop. Having read your article, I dismiss your capacity to give pertinent trading insight. Of course there are successful traders out there,… Read more »

@ Olaf. I trade 1 minute MT4 charts and I’m definitely a trader. I doubt you are a trader yourself, because your comments look like they are written by typical Internet troll. Although maybe you are trader by profession and troll by heart, I don’t know.
By the way, 1) using 1 minute chart doesn’t equal to scalping; 2) I know trader who scalps 1 minute MT4 charts at a retail broker and is very successful for decades.

Forex Trading over the Holidays? Not the Best Idea
wpDiscuz