The Brexit event proved once again that the forex and financial markets are very unpredictable. Have you ever thought that the value of the GBP could depreciate with such a pace and trade even below the 1.3000 level against the US dollar?

The GBP/USD pair did surprise many traders recently after the Brexit news and fell from a high of 1.5000 to a 1.3000 low. Other pound pairs like GBP/AUD, GBP/NZD, GBP/JPY and GBP/CHF also weakened and lot and suffered heavy losses.

Going forward, will the GBP continue to move down against other currencies or will it recover? Let us try to understand the rise, fall and then rise of the British pound.

The GBP/USD pair tumbled to a 31 year low after the outcome of the Brexit referendum. The pair traded close to the 1.2800 level where somehow the bulls managed to prevent the downside. Can they continue to hold the downside or will the ongoing tensions push the GBP lower once again?

In my view, I agree there were fundamentals involved in sending the GBP/USD pair down to below 1.3000, and the Brexit was the main reason why the pair fell with such great speed.

However, if I look at the technical charts, then a decline was written all over it. I can explain it in one single chart, which is the weekly time frame. 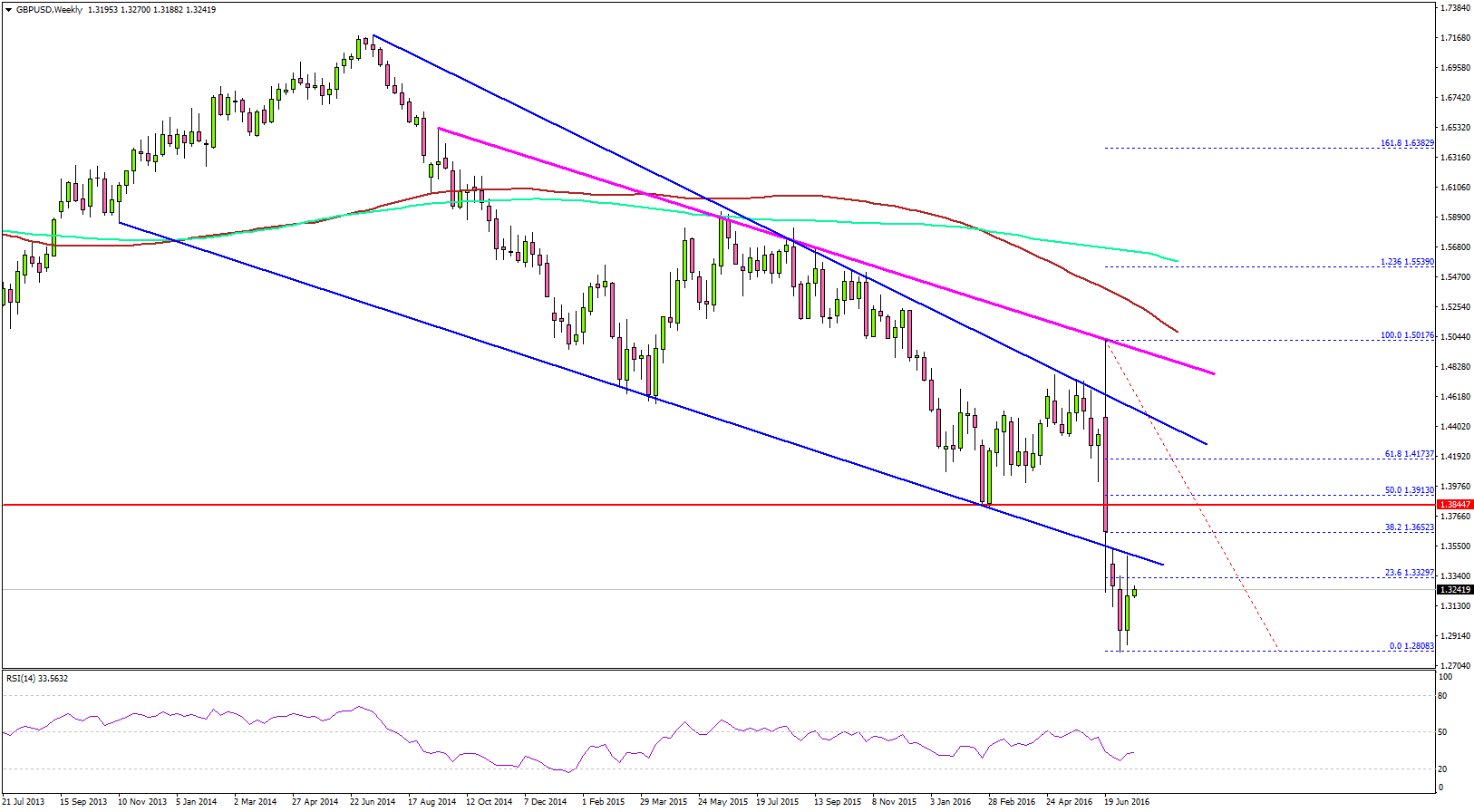 If we look at the weekly chart of the GBP/USD pair, then there was a monstrous declining triangle pattern formed with a lot of resistance on the upside. Just before the Brexit outcome, the pair was trading near the triangle resistance area, which acted as a perfect barrier and pushed the pair down.

Furthermore, there was a bearish trend line on the same chart (magenta color), which was also around the same area and provided offers. Last but not least, the pair was also below the 100 and 200 weekly simple moving averages. All these formed a resistance confluence area and stopped gains in GBP/USD.

In short, just before the Brexit outcome, technical charts were aligned in favor of sellers, and the result did the trick. If we look at the rise just before the results were announced, then it can be considered as bull trap. The GBP bears took the advantage of the same, and crushed the bulls once the result was announced.

As a result, the GBP/USD nosedived below the 1.3000 handle and posted a new 31 year low. Now, the most important question – can the pair recover going forward? I think it may be very tough for buyers to push the GBP/USD pair higher, as the broken triangle support trend line is currently acting as a resistance area and preventing a recovery.

Moreover, the 1.3800-1.4000 levels are now crucial, and may act as an offer zone. So, you must be very careful if looking to buy GBP in the short or medium term.