The Canadian dollar is back on a declining streak against the US dollar, and oil prices are playing a major role for movements in USD/CAD.

In late April 2016, we saw a rise in the Canadian dollar setting a high, as the USD/CAD pair traded as low as 1.2460. Since then, the pair has been on the rise and the CAD faced offers. There is a slow and steady uptrend, and it looks like a bottom has formed. 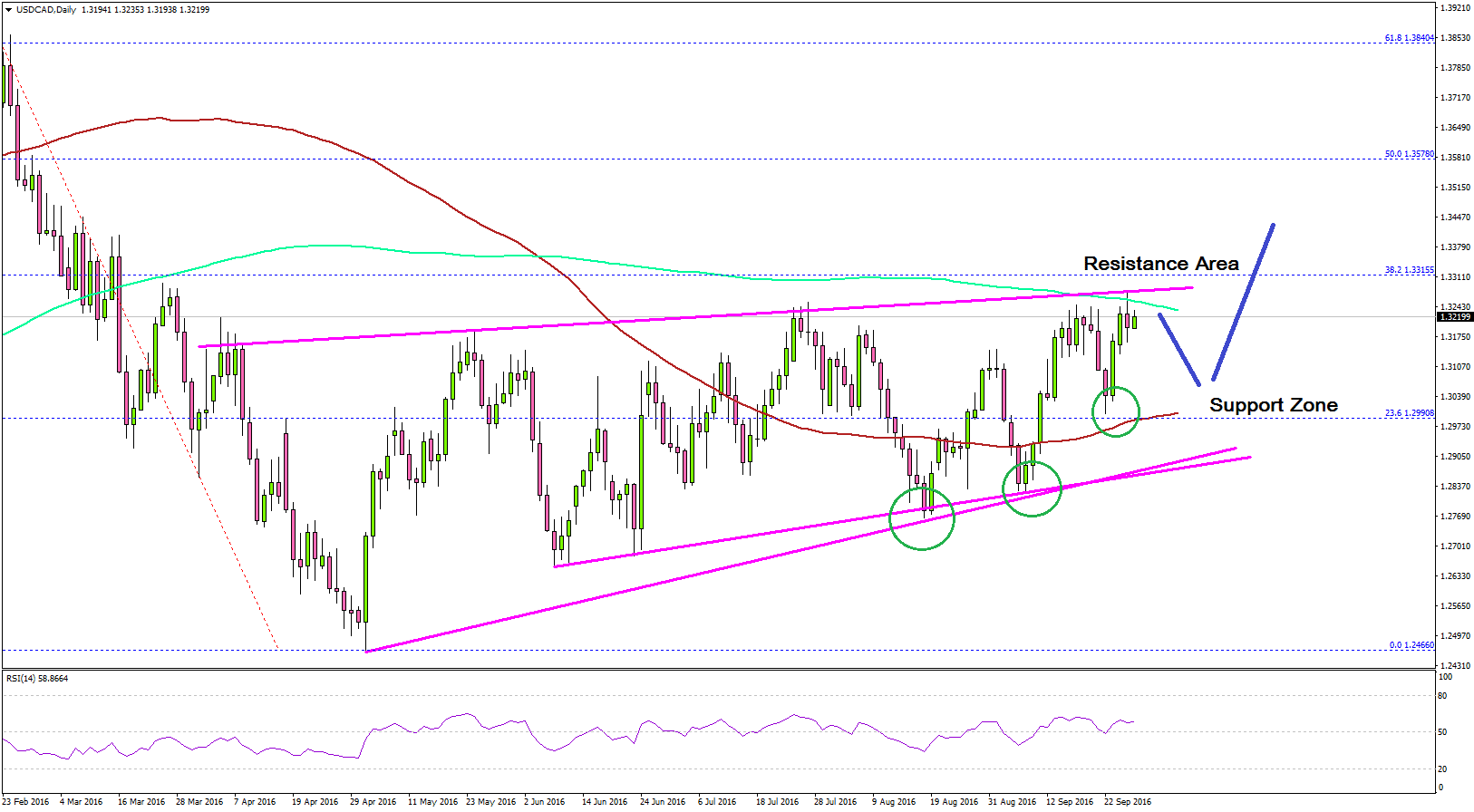 The recent uptrend is influenced a lot by oil prices. Brent Crude Oil price failed to settle above the $50 level against the US dollar, and moved down. It indirectly impacted the Canadian dollar and pushed it down too. We will analyze more about oil prices in this article.

USD/CAD Uptrend and Why Canadian Dollar May Decline

The US dollar, after trading as low as 1.2460 versus the Canadian dollar in May 2016, started recovering. The USD/CAD pair started moving higher and in the process formed a breakout pattern (triangle on the daily chart).

The pair nicely followed a bullish structure inside the triangle pattern, and recently settled above the 100-day simple moving average as well.

The second most important point is the fact that the pair also moved above the 23.6% Fib retracement level of the last BIG drop from the 1.4690 high to 1.2460 low. So, it is a positive and a bullish sign. One last key point is that the weekly chart suggests that the 1.2460 low was near a major technical level.

We can call the 1.2460 low a possible bottom in USD/CAD, which increases the chances of further gains in the near term. If there is a break above the triangle resistance, it would ignite a sharp upside move.

Alternatively, if there is a correction in USD/CAD, then the 100-day SMA may act as a support area and provide bids.

We lately saw that the oil price struggled and failed to successfully settle above the $50 mark. Goldman Sachs also recently lowered its forecast for the price of oil price. They were earlier looking for a price of $50 (per barrel), but are now forecasting $43 (per barrel).

So it remains on the edge, and there are chances of further declines in oil prices. As we all know, the Canadian economy is largely dependent on oil, and a lower price may put further pressure on the CAD.

Overall, my view is long term gains in USD/CAD, as the Canadian dollar is likely to remain under pressure in the fourth quarter.

This is not a triangle and this is a ascending wedge, which is bearish. You must be educated for Technical analysis and the public to be educated need to have exact pattern recognition. In this article the author got confused with two patterns. As Finance Magnates is educational web site editors has to do their job also and correct authors mistake