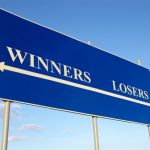 The Federal Reserve (Fed) in the US has been preparing to tighten monetary policy which strengthened the US dollar while yen pairs have been severely weakened by the Bank of Japan (BoJ’s) policy action. This policy divergence helped the USD/JPY add a further 2% within striking distance of ¥115. 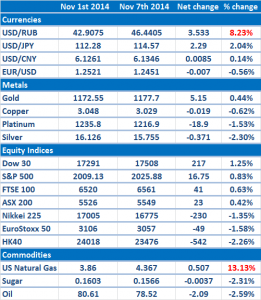 EUR/USD dropped to a new two-year low on the back of dovish comments from ECB President Draghi on Thursday. Also, the US dollar got a significant bid throughout the week as the Republican party captured control of the US Senate in midterm elections.

One of the most moving market events of the week was Wednesday’s Central Bank of Russia’s (CBR) announcement to change its exchange rate policy, essentially allowing the rouble to float freely. Specifically, the central bank will now only intervene by a maximum of $350 million per day and reserve any larger interventions for fighting “financial stability threats.”

Gold was trading higher on Friday after the US monthly jobs report showed that fewer jobs than expected were added in the economy (214,000 vs. 235,000 exp.).  Excluding Friday’s rally, gold prices dropped to a low of $1,132 per troy ounce falling almost 10% over the past 3 weeks. Additionally, over the past week gold prices (+0.44%) further dislocated from their correlation with silver (-2.30%).

Oil prices continued their down trending decline closing the week below $80 per barrel, while natural gas prices rose 13% as weather forecasters predicted that next week Arctic air may push temperatures to at least 10 degrees below normal across much of the U.S.

Equity markets have paused, with most at (or close to) multi-year highs. Last week, the best performing major stock index was the Dow, gaining 1.25%. Similarly to other indices, the Dow has staged a significant 10% reconnection with its pre-existing up trend since early October. The worst performing index was the Hang Seng, shedding 2.26%.