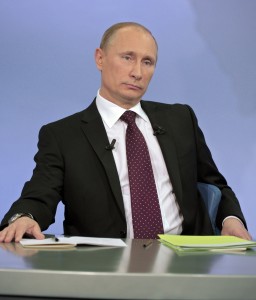 Speaking at his annual press conference, Russian President Vladimir Putin endorsed the actions of the Bank of Russia and highlighted the need for the country’s economy to diversify away from investment in oil and natural gas production. That should be encouraging news if there were free capital to channel it into different sectors of the economy, but where is it?

He further highlighted that the actions which the Bank of Russia is taking to limit the ruble’s decline are the right course of action. Tightening liquidity on the Russian ruble and increasing the provision of foreign currency liquidity would, in his words, stabilize the currency market. The deep knowledge of capital markets which Mr. Putin demonstrates sounds mesmerizing indeed.

Truth be told, this strategy did work for a while, but it wasn’t enforced by the central bank strongly enough.

On Wednesday, in the aftermath of the forex market turmoil which caused the Russian ruble to tank 35% from top to bottom in Tuesday trading, the Russian ruble liquidity drought not only prompted retail brokers to close their ruble trading books, but also the LMAX Exchange to cease offering USDRUB and EURRUB for trading.

It is difficult to ignore the confidence with which Mr. Putin speaks. He strongly supported the recent actions of the Bank of Russia, albeit clarifying that they could have taken action earlier.

In a free market tone (and, in our view, correctly) he discouraged direct market intervention operations on the open market and highlighted that the Bank of Russia shouldn’t be “burning” forex reserves to feed speculators.

Vladimir Putin correctly pointed out that the current situation is a result of external factors, namely oil prices collapsing and sanctions imposed by the West, but he also outlined that Russia has failed to diversify its economy.

The stark optimism in his words was supported by a statement explaining that the current situation is not likely to continue deteriorating because of global growth. He expressed confidence that the Russian economy will “inevitably” recover and highlighted the need for “further” diversification.

In the most pessimistic scenario the term necessary for recovery is two years “but it could be sooner,” Putin added. Let’s agree to disagree – that’s rather the most optimistic scenario, considering our current position in the economic cycle and the slowing Chinese growth hitting global commodity markets.

“I hope that the current high key interest rate will not remain for long, the economy will adapt to the new conditions of low oil and natural gas prices. Restructuring is inevitable,” Mr. Putin said.

If the concentrated capital close to the Russian government elects to invest it in long term production of goods and services instead of get-rich-quick schemes as is the norm, then yes, it’s possible.

After yesterday’s rally, the Russian ruble market has been trading more or less flat against the US dollar as oil prices are higher by 4.5% in today’s trading. However, it is noteworthy to say that the currency hit 55 rubles to the dollar after the market opened in Moscow.

Those gains quickly evaporated and were likely caused by a chunk of the $7 billion war chest prepared by the Russian finance ministry yesterday.