Chicago-based operator of commodity futures marketplaces, CME Group, with some of the biggest commodities exchanges across the globe, including the Chicago Mercantile Exchange as its subsidiaries, today reported its financial results for the second-quarter (Q2) of 2014. The group’s report reflects a disappointing turn with decreases in revenues and earnings for the CME in Q2 compared to the positive previous quarter.

“Historically low levels of volatility impacted the overall market during the second quarter, although the effect on CME was lessened by the diversity of our product lines,” said CME Group Executive Chairman and President Terry Duffy. “Though total volumes were nearly flat year-to- date through the second quarter, our interest rate complex was up 7%, a strong outperformance compared with the rest of the market. We continue to see positive economic signs that could potentially lead to a more traditional Federal Reserve monetary policy. This would affect the Fed Funds rate and likely accelerate market activity as firms shift back into growth mode. Already we are nearing historic levels of open interest as we approach 100 million contracts, up 18% year-to-date.”

“We continue to strengthen our global footprint with a record 24 percent of our electronic volume coming from outside the United States during the second quarter, mainly driven by activity coming from European customers,” said CME Group Chief Executive Officer, Phupinder Gill. “Also, we announced plans to acquire Trayport and FENICS, pending regulatory approval. Trayport will give us deepened access to commercial customers in the rapidly evolving European energy markets, while FENICS’ strong client base, particularly in Asia, will further complement our foreign exchange (FX) product distribution. In addition, we are encouraged that trading volumes in our recently launched European exchange are beginning to gain early traction, “he added. 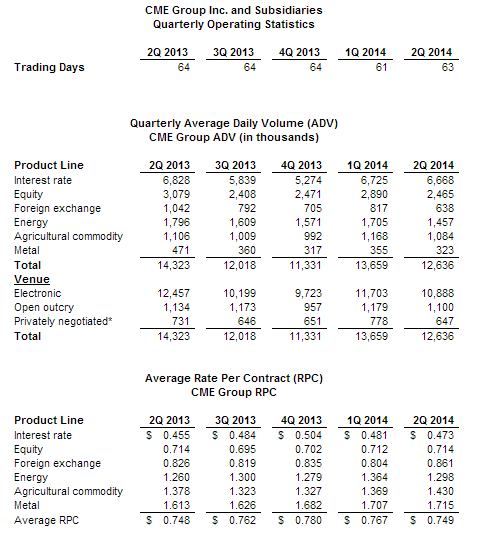