A bold new experience was unveiled on the online forex space on the 26th of March – the community had the chance to embark on a virtual adventure in a new breed of an online gathering – the iTrader Expo – a swift collaboration between FX Street, Investing.com, Conversion Pros and Forex Magnates. The virtual space has been specifically designed to accommodate a number of traders to visit and communicate with companies from the forex industry.

According to data gathered during the event, a total of about 3,200 visitors left more than 1,200 leads and spent an average of 25 minutes on the website. All of this happened in the space of twelve hours. The cartoon-like design and the vast amount of speakers in the webinar space at the event were enough to bring together fellow current and prospective traders to meet with exhibitors and learn from some of the best and brightest professionals in the forex industry.

The funky looking, cartoonish virtual lobby opened its doors for the visitors as scheduled at 9AM GMT. Once registered, every attendee who signed up received their access code to get into the lobby, which granted access to the two main rooms at the iTrader Expo – the Exhibition Hall and the Speaker Hall. (To be fair there was a third hall called the Lobby Bar, but apparently not many virtual drinkers have shown up to fill that up).

An impressive line-up of speakers were assembled by the organizers to satisfy the curiosity of existing and potential traders who had signed up for the Expo. In a charmingly awkward and digitally entertaining environment, contacts between exhibitors and their prospective clients have been brought to… well, a new level. While some technical hiccups occurred, there is no doubt that the doors for future similar events have been opened. 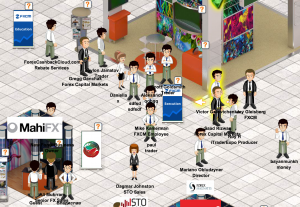 Attending traders were able to visit the virtual booths of the exhibitors and participate in some interactive conversations with representatives of the companies exhibiting. While chat windows were opened one after another, exhibitors had the opportunity to look for leads and communicate with their competitors. For those who were not keen on spending time mingling, snatching leads and contacts were still easy – any participant in the Expo was able to simply walk around and grab a “business card” of a prospective client or another exhibitor. 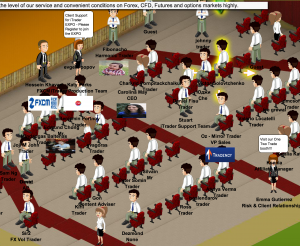 Forex Magnates’ reporters spoke to traders visiting the expo and found out that they were actually pleasantly surprised by the event. They got the opportunity to talk directly with their prospective brokers and technology providers, while having the pleasure of communicating with other forex aficionados. While the main interest that attracted them to the iTrader Expo was tied to the vast amount of speakers, the show experienced some technical difficulties during the first batch of webinars, however, they were subsequently optimised to improve the quality of the experience.

Most visitors were attracted by the inviting cartoonish commercial that incorporated a friendly snapshot of the sims-like design. There is no doubt among participants that the new format can be a major source of innovation in methodology to attract leads and gin up feedback on new products. Granted, as in any new brand’s new endeavour organisers of the event will have to work on the technical challenges arising, however no completely new concept has been born flawless. It is solely in the hands of iTrader Expo’s organisers to address the challenges that have arisen and provide a smoother experience to the attendees next time.

Share this article
Tags: fxstreet
Got a news tip? Let Us Know

A very interesting event. I was a little sceptical, but thought it was worth a try. My initial reaction was the #GUI was a bit clunky, and navigating around slightly awkward, but I was surprised at how many people I was able to get talking to. As well as speaking to my existing contacts, I also made some new ones. As a B2B sales person I would definitely attend this event again.

I’m very surprised I did not get an invitation or some kind of notice. How do we keep up with these things?

Will there be one later this year or next year?