Over 20 million people in America lost their jobs in just one month. On the financial markets, COVID-19 caused the highest volatility in at least 12 years, and according to some analysts, it could lead to the biggest market collapse since WWII. Finance Magnates Intelligence took the volatility during the last two crises under the magnifying glass, checking when price fluctuations were greatest.

2008 vs. 2020: How does the coronavirus crisis affect the valuation of financial instruments?

Although the subprime mortgage crisis that began in the United States in December 2007 and then spilled over into the world in the form of a widespread recession was mainly associated with the collapse of Lehman Brothers, the bank went bankrupt only in September 2008. During that time, the market observed one of the strongest volatilities, comparable to the current one.

It is widely believed that the current crisis and panic-stricken sales on the financial markets have brought the greatest volatility in modern market history. This is being somewhat confirmed by Wall Street, where traders observed the worst and best weeks since the crisis of the 1930s and the strongest two-day slides in history.

From the perspective of the analyzed period of almost three months, the S&P 500 index in 2020 presents a visibly lower drop. The difference between the prices at the beginning of February, when the index drew historic highs, and the end of April was nominally about 400 points, translating into a 15% decrease. Although in 2008, the same index was valued 2.5 times cheaper, the percentage fall in the comparable period was 33%. However, on the daily average volatility basis, 2020 brought stronger moves (3% per day vs. 2.4% in 2008). 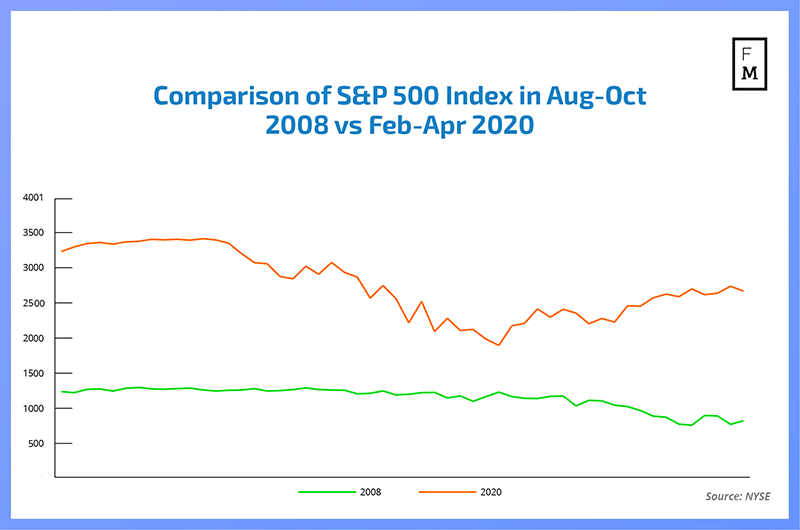 On November 21, the CBOE index that tracks market volatility reached the level of 80.74 points, which was the highest in the history of the benchmark. On March 16, 2020, however, the all-time high was breached. The heightened price fluctuations had a visible impact on the brokers’ results and reported numbers, bringing a very strong growth of the client base and revenues.

“From the brokerage houses’ point of view, Covid-19 has primarily influenced the volatility of global financial markets, and such volatility means a greater interest in investment accounts. In XTB, the number of new clients in January and February oscillated at 4600, and in March, this number increased to over 12000. The current volatility has also translated into higher turnover, which in the first quarter of 2020 was the highest in the history of the company,” – said Omar Arnaout, CEO at X-Trade Brokers DM S.A.

GAIN Capital Holdings, Inc., the largest provider of retail FX in the United States, showed a strong increase in revenues relative to last year, as corona sparks traders’ activity. Gain’s net income rose to $77.3 million in the first quarter, a significant advance from a loss of $28 million. On a quarterly basis, the company’s revenue rose 250 percent from $53.3 million in the fourth quarter of 2019.

At this point, we are only at the beginning of the coronavirus-recession, and no one knows how strong the effect on the world economy could be. But the statistics so far may be encouraging. At least in terms of investment platforms, which had largely gained on the current situation. However, the global economy may face a much more negative scenario.

To get the full article and the bigger-picture perspective on the coronavirus affecting the financial industry, get our latest Quarterly Intelligence Report.