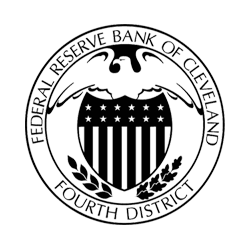 Whether you’re starting a new project, or looking for some solid financing – venture capital has been the way to go for decades. It was only recently joined by the new phenomena of crowdfunding. Aside from bringing in funds, campaigns on websites such as Indie Go Go or Kickstarter have the potential to dramatically raise awareness about a new product to levels undreamed of before.

Illustrating how powerful the trend has been is one of the latest takeover deals by social media giant Facebook, which acquired a startup venture named Oculus VR founded by Palmer Luckey. The company launched a Kickstarter campaign to secure funding for the development of their first product – virtual reality goggles for “immersive gaming” dubbed the Oculus Rift. The firm received $2.4 million through crowdfunding and was acquired by Facebook a couple of months later for the lofty sum of $2 billion.

What Is Peer-to-Peer Lending?

The concept behind peer-to-peer lending is to provide the opportunity to worthy borrowers to get funding from “peers” who have the funds available to provide credit to institutions. And the best part of it – it doesn’t have to happen through a financial intermediary like a bank. The loans are instead transacted online through several peer-to-peer lending platforms. Recently, P2P lending firm, Zopa hit a milestone, announcing that it had achieved $1 billion of total loans transacted on its platform since launching in 2005.

While crowdfunding has been the way to go for brave new ventures which are just starting their business but have already come up with a unique product, in a parallel world, already established businesses have the opportunity to raise funds in a different way.

The main difference between peer-to-peer lending and crowdfunding is that it represents a way for the company not to give away any equity, but instead pay interest on the funds which are borrowed, just like with a loan from a banking institution. For an established business which has the collateral to put up, this can be the most viable opportunity for obtaining additional capital, as interest rates can be lower than those offered by traditional institutions.

The Federal Reserve Bank of Cleveland has released a new study dubbed “Peer-to-Peer Lending Is Poised to Grow,” which outlines the perspectives for this rapidly growing trend in lending. While the paper itself focuses its attention mainly on the consumer side of this still relatively new segment, the trends in the business lending side of this business largely coincide. 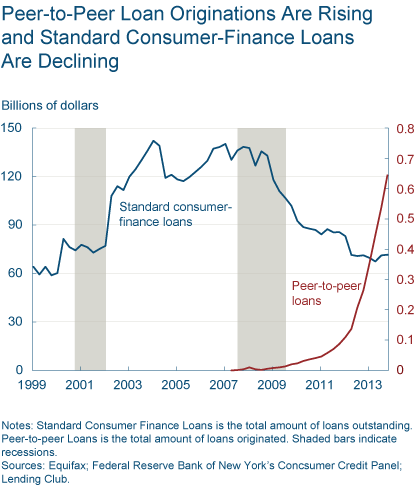 Senior research economist at the Research Department of the Federal Reserve Bank of Cleveland, Yuliya Demyanyk, and research analyst Daniel Kolliner, have come up with a paper revealing the perspectives for the peer-to-peer (P2P) lending sector. With the main focus being on consumer and not on business lending, according to the paper the sector has been growing by an average pace of 84% per quarter since the second quarter of 2007 when the official “great recession” started. Throughout the same period, conventional consumer-finance lending has been shrinking by an average of 2% per quarter. 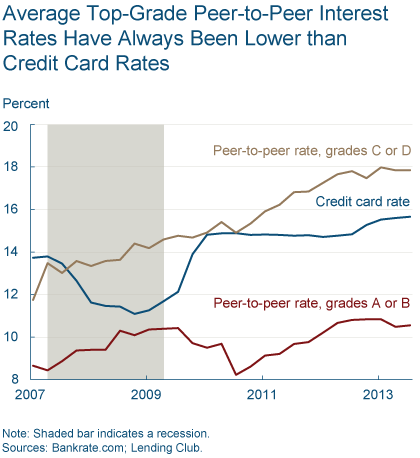 Consumer peer-to-peer loans are categorized by grades from A to D, depeding on the creditworthiness of the borrower. About 50 percent of loans are classified to borrowers with grades “A” or “B”. They have been consistently getting much better rates than regular consumer financing like credit cards. For those individuals and businesses which have good credit and solid collateral, the FED study finds that “interest rates have a strong negative correlation with the credit card interest rates, meaning that when banks increase their interest rates, peer-to-peer lenders decrease theirs.”

Major Players in the Industry

Peer-to-peer business lending is a viable alternative to traditional financing, with different companies offering up to £3 million in the UK. The maximum amount one can apply for with UK-based peer-to-peer lending company, Funding Circle, is up to £1, while Thincats can secure you up to £3 million, repayable over terms of up to 5 years.

With the business originating in the UK back in 2005, US companies which provide P2P business lending have been limited to providing up to $100,000, with Lending Club and Prosper being the major players in the United States. The former company is also the biggest player globally, sporting on its website as to having distributed close to $5 billion in loans.

It’s worth highlighting that depending on the size of the loan that a company is after, some form of security or collateral will be required. This can vary from a personal guarantee to a particular asset or assets of the business, also depending on the platform and the country from where the firm is applying for such funding.

As part of its mandate to regulate consumer credit, the UK’s Financial Conduct Authority (FCA) is also responsible for regulating peer-to-peer lending. A new regulated activity is being introduced, giving the UK watchdog the responsibility to protect consumers borrowing money, however for now, business borrowers do not fall into this category.

Basing its decision on the Securities Act of 1933, the Securities and Exchange Commission (SEC) has mandated peer-to-peer companies to register their offerings as securities in 2008.