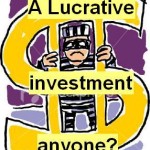 If you noticed, I’m monitoring here all the Forex ponzi and fraud scams that I know of in order to warn potential naive investors from investment that sound too good to be truth.

Every once in a while these scammers are caught and convicted and are sent to serve long terms in prisons, although the unfortunate investors are almost never able to collect all or even part of their money back.

Yesterday another Forex scammer was sentenced to serve time:

A MIDLAND fraudster who scammed £500,000 from expats in Indonesia has been jailed.

Alan Gardner, aged 42, from Bromsgrove, was sentenced at Worcester Crown Court to six years in prison.

Posing as a financial advisor, he created a fictitious foreign currency trading scheme, supposedly backed by reputable Swiss bank UBS, and offering a staggering 48 per cent rate of return on investments.

Authorities say the scam, in which four British expatriates were defrauded, is a classic case of high-yield investment fraud.

Gardner operated from a room in his Bromsgrove home and used an intermediary in Jakarta, and his links with the ‘expat’ community to attract investors to the scheme.

He returned to the UK in 2003 and set up the Aegis Forex Fund, which he would use to scam his victims. By 2005 he was promoting the fund in Indonesia using false documents which included the unauthorised use of the UBS logo. In total, five investors in Indonesia, all expats working in the petro-chemical industry in the region, were drawn into the scheme. One investor was shown a fabricated table of figures showing a growth of a $100,000 investment to $151,000 over a three-month period.

One investor lost a total of $357,000 in the confidence trick. The Serious Fraud Office said Gardner had worked in financial services during 2001 and had a brief spell with an advisers’ firm in Jakarta, the Indonesian capital, but did not complete his employment probationary period.

Gardner later returned to the UK when he set up the purported Aegis Forex Fund and by 2005 he was promoting it in Indonesia with false publicity material.

Investments were sent to bank accounts in Switzerland and UK controlled by Gardner and were withdrawn almost immediately.

The Serious Fraud Office said the pattern of withdrawals strongly suggested that Gardner had “no real intention” to invest on behalf of his clients.

He was sentenced to six years by Justice Hooper, who said that there had been “overwhelming evidence of fraud carried out over a significant period of time with careful planning”.

A confiscation hearing will now take place to recoup some of Gardner’s earnings.