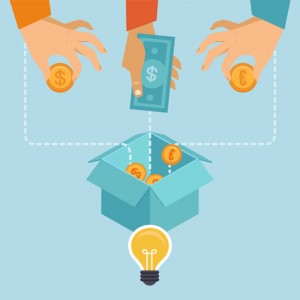 For Kickstarter and crowdfunding, it can be argued that 2012 was their breakout year, following the successful $10 million funding of the Pebble smartwatch. The fundraising proved that crowdfunding can be used to fund multimillion dollar technological, innovative projects. Since then, Kickstarter has grown; The firm just announced that in 2014 the crowdfunding platform was used to raise $529 million in pledges from 3.3 million users.

While not yet as large of a market as traditional crowdfunding, 2014 wasn’t too shabby either for equity crowdfunding. According to end-of-year reports from AngelList and OurCrowd, both sites were used to raise over $100 million in equity crowdfunding from accredited investors.

This successful group of syndicate-leading angels provides backers the ability to co-invest in deals that they wouldn’t have had access to otherwise and is among the advantages of AngelList for investors. The combined syndicate investment itself is viewed as one single owner. For startups, the syndicate offers them the ability to widen their ownership base of backers who can help with “getting the word out” about them without having to have too many registered owners. Depending on jurisdiction, firms are limited by the amount of shareholders they can have on record before being required to file equity-sale registration forms.

During 2014, this combination of benefits for investors and startups led to $104 million raised by 243 startups and 2,673 investors through AngelList Syndicates. The top three rounds were $2.8 million in Beepi, $1.5 million in MD Insider and $1.2 million for Life360.

Not to be outdone, OurCrowd also announced that they had surpassed the $100 million barrier in 2014. Similar but different than AngelList, OurCrowd is an Israel-based crowdfunding platform that acts as the lead for investments being raised. Rather than relying on lead angels, OurCrowd provides internal due diligence to filter what they believe are the best opportunities for their investors. Once approved for funding, investors choose the amount they want to invest in each crowdfunded offering.

In 2014, 56 companies used OurCrowd to raise funds using the platform from 6,500 investors. During this time, the average investment amount from users was $25,000 with 67% of investors backing more than one company. Other achievements in 2014 included the first crowdfunding-backed IPO exit when their portfolio firm ReWalk Robotics went public on the Nasdaq this past September.

Looking towards the future, OurCrowd is currently raising funds for Borro, a UK-based alternative lending company in the same space as recent IPO star and P2P lender LendingClub. The funding is part of a larger investment round including institutional investors which is typical of many of OurCrowd’s crowdfunding investments. According to OurCrowd, investors on their platform have reached over $5.6 million in backing for Borro, which they believe to be the largest crowdfunding deal ever in the industry.