Leading bitcoin exchange, MtGox, has announced that its temporarily suspending US dollar withdrawals to account holders. MtGox, who transacts around 65% of bitcoin conversions, stated that it is experiencing rising volumes of both withdrawals and deposits over the past few weeks. As of the result they said “This increased volume has made it difficult for our bank to process the transactions smoothly and within a timely manner, which has created unnecessary delays for our global customers.” To provide a solution, MtGox announced that it is making improvements which have caused the temporary suspending of US dollar cash withdrawals. The company added that non-USD withdrawals are unaffected as well as both bitcoin and US dollar deposits.

The news is the latest round of problems for MtGox and its customers. Activity on the exchange was halted earlier this year due to a surge of trading as well as DDoS attacks. Also, they became the target of a lawsuit from their North American partner Coinlab as well as having their US account seized by the US Department of Homeland Security. As a result of the issues, along with questions about the exchanges ability to handle multiple simultaneous orders, it has led to increased interest from bitcoin users to move volumes onto other exchanges. In this regard, an early and important firm to leave MtGox was Bitfinex. Bitfinex, a leveraged bitcoin trading platform provider, began to suspend sending customer orders to MtGox, and has instead been primarily working with Bitstamp. As a result, Bitstamp has been an early benefiter of MtGox worries, and has experienced a rise of its overall exchange market share to around 15% from 10% earlier this year.

The current news from MtGox though hasn’t affected prices of bitcoin. Since making its announcement earlier today, BTC/USD prices have risen to above $110 from $108. 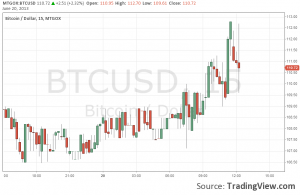 Compared to the normal BTC volatility, $108 to $110 is practically nothing.

I think an article needs to be done addressing the weakest link syndrome with BitCoin. What are the worst case scenarios and how does the bitcoin community best deal with them.