They say a rising tide lifts all boats and for today at least it stands true for the cryptocurrencies market. After the recent massive rise in both the price and overall market capitalization of Bitcoin, Ethereum now sets impressive records of its own.

The price of Ethereum has increased by about 35% over the last week, almost 16% in the last twenty-four hours, and reached as high as $19 for the first time ever in its relatively short trading history. As a result, the ETH market cap crossed over and now is still standing above $1.5 billion.

Supporting the rise are very strong ETH trading volumes, over $52 million in the last day alone.

When we last reported about the market cap of Ethereum almost a month ago, it had just returned to the $1 billion level. At the time, the ETH/USD exchange rate was only as high as $13. Therefore, we can say that the cryptocurrency completed a rally of 50% in less than a month.

Ethereum has received a lot of positive media attention recently with interviews given by its top developers and of course with all the hype around the DAO. Additionally, two Australian Bitcoin exchanges have announced they added ETH trading this week. However, the most plausible source for its very recent rise is a slipstreaming effect from Bitcoin’s rally – traders who think that they might have missed the train with BTC pouring into ETH instead. 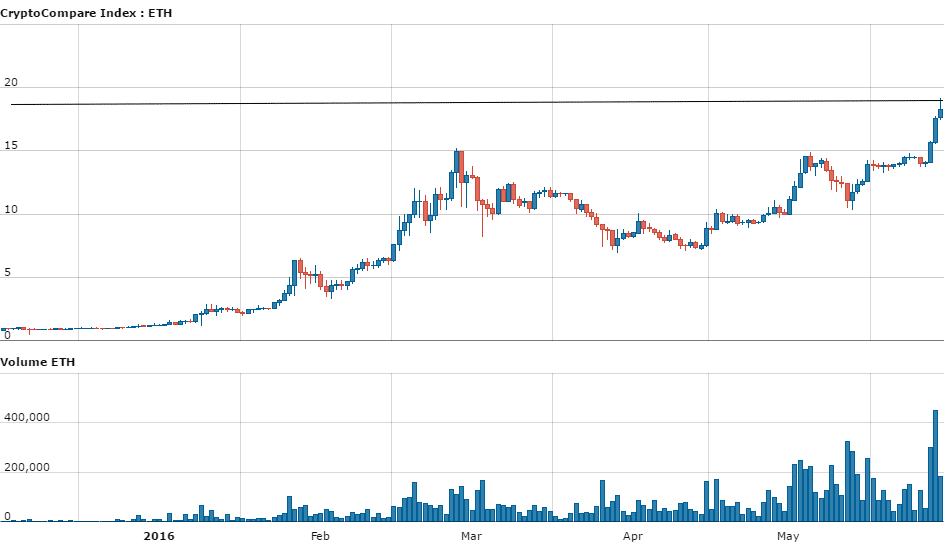 Charles Hayter, the CEO of CryptoCompare.com, commented: “Ethereum is outshining Bitcoin and looking at the data a new trading pattern is emerging with USD, CNY & EUR increasing their market shares of money flows from 15% to 30%.”