It appears that Dogecoin (DOGE) has reached the other side of its peak, at least for now.

Just over 2 weeks ago, Dogecoin reached another multi-month high in bitcoin terms, trading at 117 satoshi. At the time, it was assessed that although the gains appear to have been hard earned over a relatively extended period, such multifold rises are ripe for major corrections sooner or later.

Indeed, DOGE has now given back nearly 40% since achieving its latest peak. Somewhat reminiscent of bitcoin’s fizzling following its rally, losses have been steady and gradual, indicating that we are likely in a profit taking mode. Also, while the merged mining has added to its stability, it can be argued that the market reacted too much, too quickly, especially when considering that such a plan was known ahead of time.

The 200-day moving average (MA), which has interestingly kept up its decline despite the recent rally, was finally surpassed at 74 satoshi one month ago. DOGE has kept its head above this mark since then, but is now in danger of slipping back below. The MA is now at 66 satoshi. 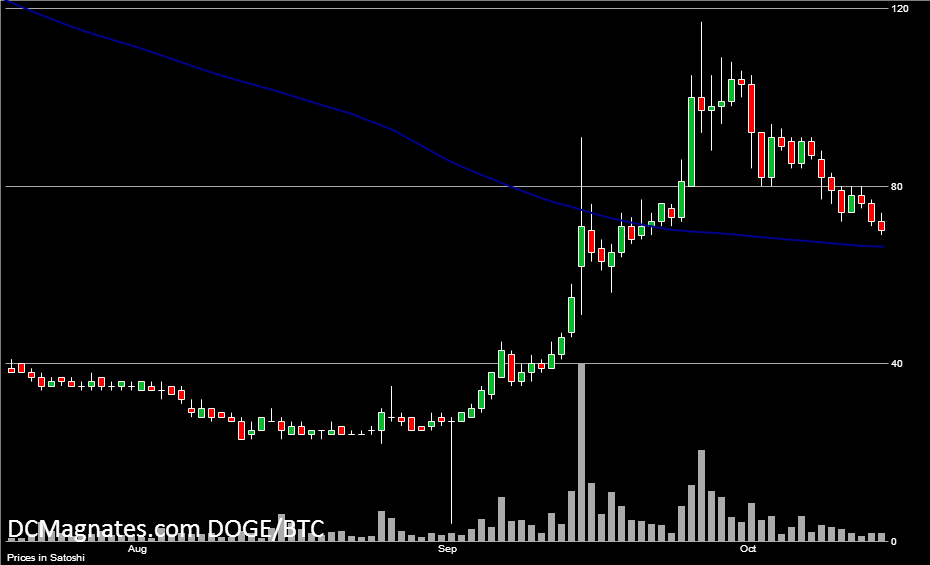 The 70 satoshi mark had also served as a stable support level prior to the second leg of its rally. A significant break can cause prices to further unwind into the 50’s and even 40’s.

In its latest push, DOGE had also exceeded Nxt in market cap rank. Its recent struggles though have placed it just barely head. A loss of 8% will put it behind. It currently ranks 5th (3rd among mineable currencies), worth $27.2 million.