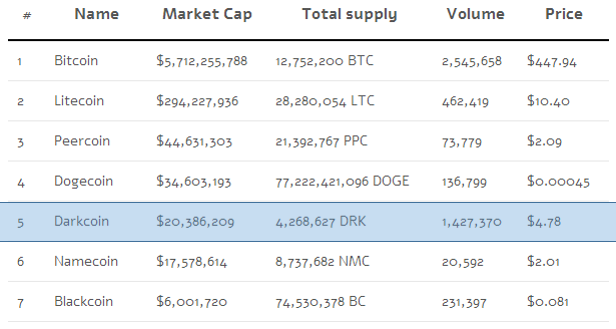 Will this last? Though an impressive rally, it does appear that the descent has begun. Anecdotally, such rapid advances are unsustainable, as we observe with any asset. Virtually all coins making such rapid launches into the upper echelons of market cap have not dwelled there very long. They have crashed back to earth, and then some. Auroracoin and Isracoin are prime examples.

Some traders seem to think otherwise. On one of the Darkcoin subreddits (the other is restricted to private personnel), commenters debated if Darkcoin has actually ever experienced comparable corrective behavior to other altcoins. One proclaimed, “Its only temporary! Once rc3 [the latest version] for darksend comes out later this month, we should see another price rally, hopefully around $10 :).”

On the BTC-e chat, traders dared to engage in discussion of the hot coin at the risk of getting slapped with a ban for discussing coins not traded on the exchange. One commented, “I dumped my bc for a loss last week, decided to put the btc in to drk.”

While a steep correction is expected- if not immediately, then over a few weeks- it should be pointed out that in theory, there are underpinnings to Darkcoin’s value (again, in theory). Its goal is to make all cryptocurrency transactions truly anonymous, something which its founders feel Bitcoin has failed at:

“When making payments with Bitcoin it’s like leaving your checking account open in your browser and everyone on the internet is able to see what you bought. It’s really a shame the original development didn’t aim to prioritize the user’s privacy.”

Thus, its payment system, DarkSend, splits payments and pools them with split payments of other users in an effort to “scramble” their information. Receivers of payments draw coins from the pools until they receive the correct amount.

The issue of privacy in cryptocurrency has become a hot topic recently when the “Dark Wallet” extension was launched. Like Darkcoin, it looks to keep transactions 100% anonymous. Its backers were not shy about its “dark side”, saying, “Well, yes, bad things are going to happen on these marketplaces…..Liberty is a dangerous thing.”

It would therefore not be surprising to see the drivers of privacy and anonymity fundamentally propel the prices of coins best geared to support them. Indeed, many will argue that the underground worlds of crime and drug dealing have largely been the fundamental drivers behind Bitcoin’s increasing demand and value over the past few years.