Only on Friday we reported that the price of Bitcoin reached $1900 thanks to a rush of investment from Asia, but that did not stay a record for long. The BTC/USD is now trading at a historic level of about $2070 per bitcoin, giving its entire blockchain a market cap of about $34 billion. 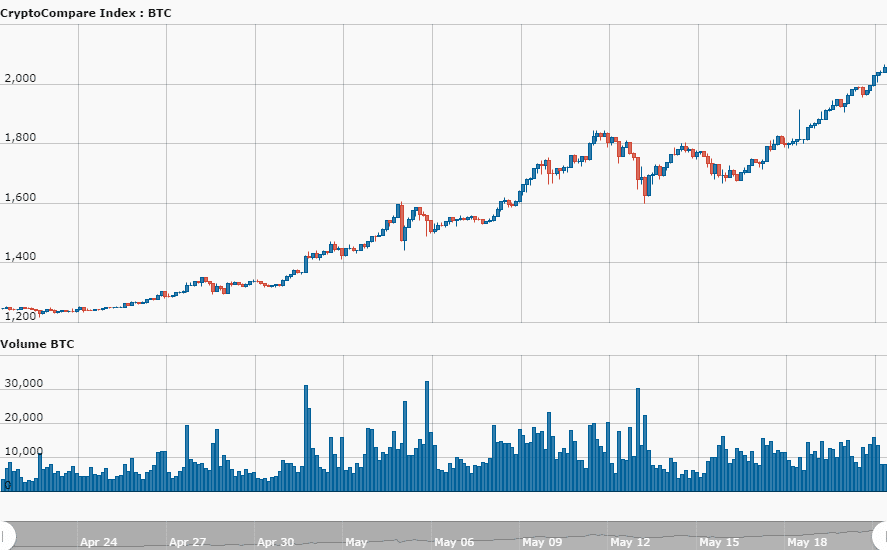 “Long-term Bitcoin loyalists have made a handsome return. Nearly seven years ago to the day, the first real-world Bitcoin transaction was completed in Florida, when two pizzas were bought for 10,000 Bitcoins. If you’d invested $100 in Bitcoin that day and left it there, you’d be sitting on over $20m right now.

The $2,000 mark is a historical moment for Bitcoin. Landmark moments keep happening – the value jumped $500 in just two weeks. Bitcoin is gaining some serious momentum among investors on our platform, with 88% of Bitcoin traders still buying the asset.

One might have expected that the WannaCry cyber-attack – in which hackers asked for payment in Bitcoin – would have had a negative effect on the price, but it seems like not even a worldwide ransomware attack can prevent the rise of Bitcoin.

As more and more people become familiar with the technology and real-world uses are implemented in more sectors, we can only expect investors to place more trust in the asset, and for prices to rise.

As Japan ups their volumes and with SEC announcements to come on an Ethereum ETF and Coin ETF, we may well see more volatility in cryptocurrencies.

While Bitcoin has taken most of the limelight recently, other cryptocurrencies such as Ethereum have also been experiencing major landmark moments. It is currently trading at an all-time high of $134, having broken $100 for the first time on Thursday.”